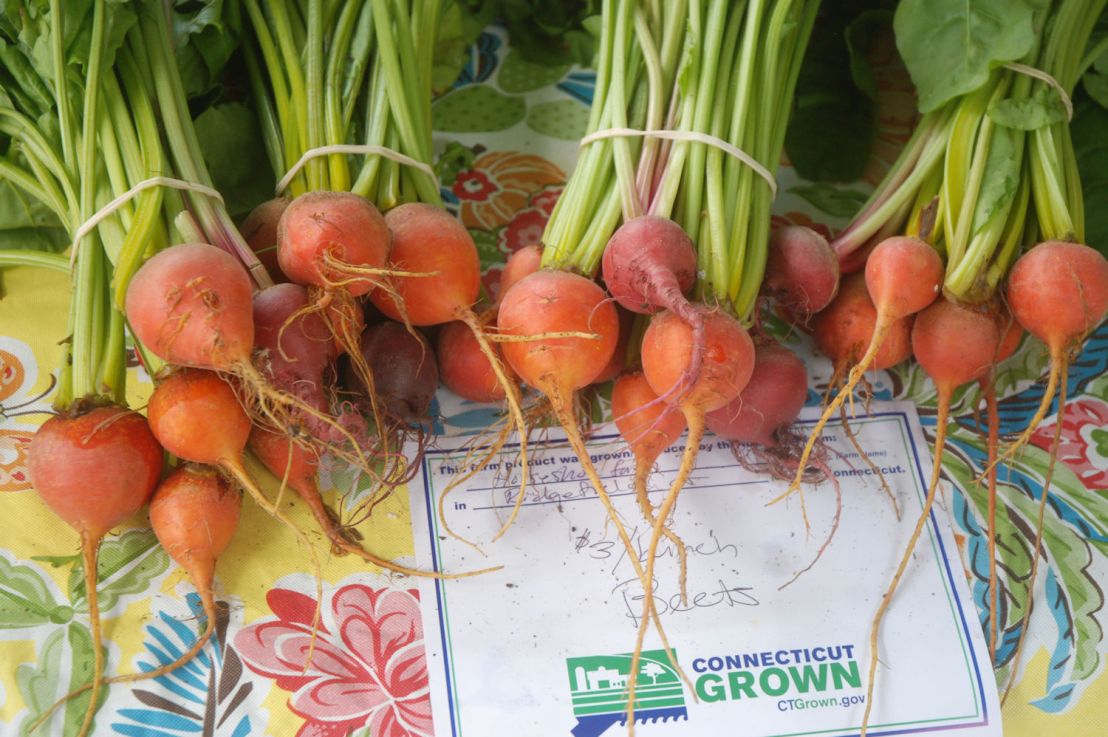 It finally happened. The sincere vendors of local produce at Westport Farmer’s Market have been joined or outnumbered by the crazy peddlers of pseudoscience and other woo. Starting out with organic. Organic farming is a marketing technique. It does not produce healthier or more nutritious foods, just more expensive ones. If you don’t think so, compare the prices of strawberries. 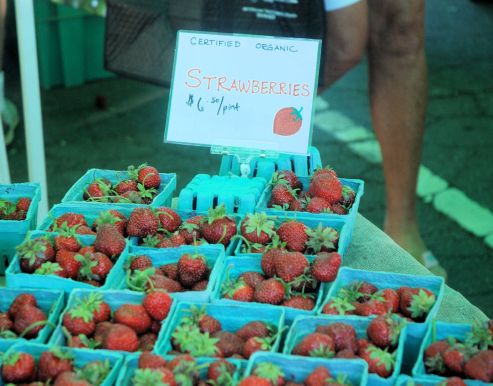 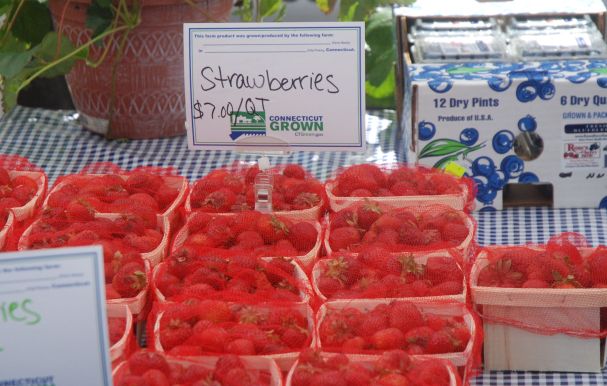 You can buy a pint of organic strawberries for $6.50 or you can buy a quart  of conventional strawberries for $7.00. Is this a scam? Yes, it is. These are both local strawberries grown nearby. You are being diddled! As we have noted many times, there is no good reason to buy organic produce. Organic farming has lower yields (sometimes only 60% as much) and is not as environmentally sustainable.

If you don’t believe me, the Washington Post recently wrote up an article on strawberry farming, noting that the best strawberries by far are grown in California where the season is longer and the climate perfect. You can buy a pound of California strawberries at Stop and Shop for $2.99 and a pound of organic California strawberries for $3.99. You probably won’t find much difference in flavor. Because of packing differences (pints versus pounds) the price differential may not really be double, but the hit is substantial for no good reason. But remember, we aren’t just comparing California and Connecticut, we are comparing two Connecticut farms a few miles apart. 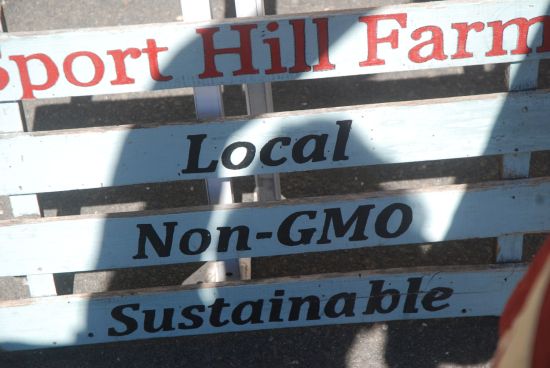 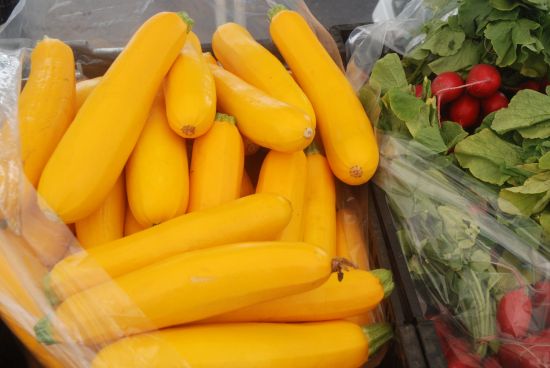 Sport Hill Farm in Easton, CT is a substantial business with a good reputation for their organic produce. They even supply a number of local restaurants. But since they are “organic” why go on and say they are non-GMO?  (“Organic” is by definition “non-GMO”)

In fact, as far as I could see, the only produce they had that even had a GMO version was their summer squash. Nothing else in their extensive crop list has a GMO version. These are very capable farmers, and they surely know this. They are just doing fear mongering marketing. As the National Academies of Science has stated, along with every other major scientific organization in the world, GMO crops pose no more harm than conventional crops. 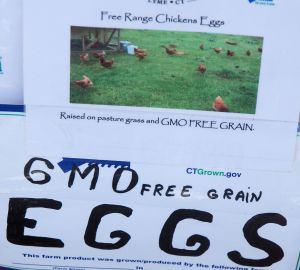 But it gets worse. How about the vendor(Beaver Brook Farm) with these eggs? The chickens are fed GMO free grain? Wow! Do you think that a chicken eating grain bred by one technique over another is going to be any different? It’s ridiculous! Remember chicken growers, GM is not an ingredient. It is a crop breeding technique! I quote my colleague Layla Katiraee who jokes about a boa constrictor eating a rat and because of this hypothetical (and ridiculous) gene transfer argument, he creates a rat-strictor. You don’t believe that do you?

And as far as free range chickens go, the Journal of Poultry Science published a substantial series of studies showing the caged chickens did the best and the cage free the worst. 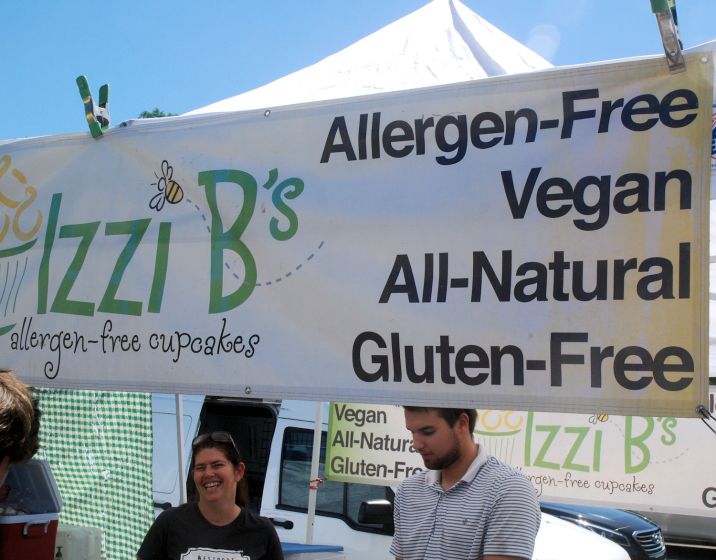 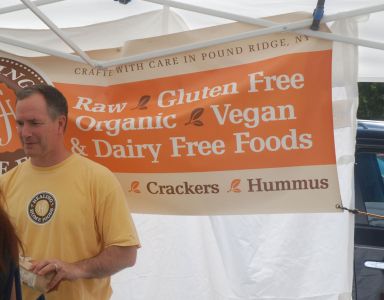 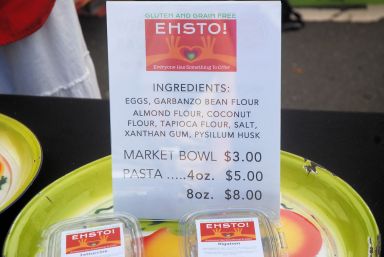 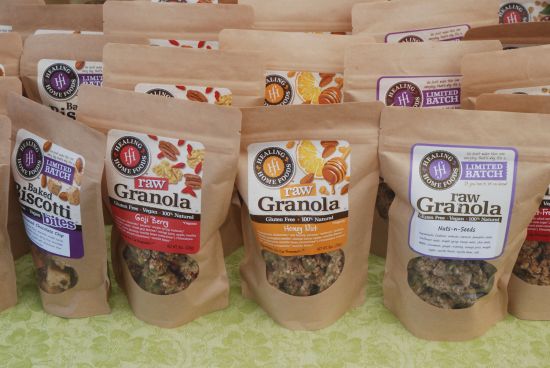 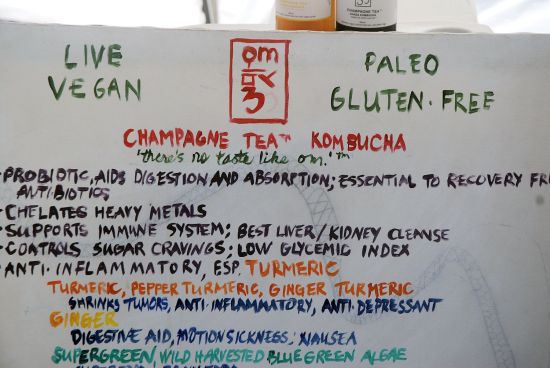 There is any number of very good bakeries in or near Westport that exhibit regularly at the Farmer’s Market. However, it is really disappointing to discover that they are all flogging their Gluten Free products as if those are products in great demand. Gluten occurs in wheat and in a few other grains, but is for most of us a very valuable nutrient. Only about 1% of the population suffers from the autoimmune disorder that leads to celiac disease. These people cannot eat gluten: it not only can cause severe discomfort, it can eventually damage your digestive system. However, far too many people somehow believe that not eating gluten is somehow “healthier,” when just the opposite is true. Gluten free products are less nutritious, and for the most part, don’t taste that great.

Now some people claim to have Non-Celiac Gluten Sensitivity (NCGS), but whether this is even an actual disorder and whether it has much to do with gluten is very much in doubt. You can read a lot about the status of research into NCGS here. And low carbohydrate diets are not very healthy. 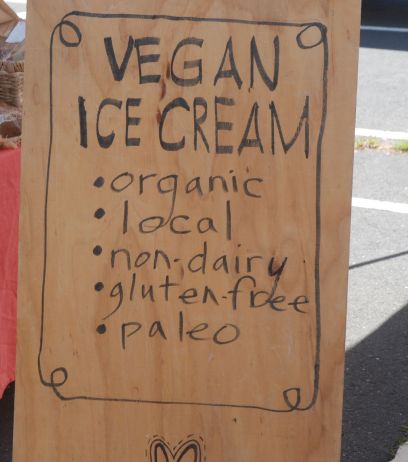 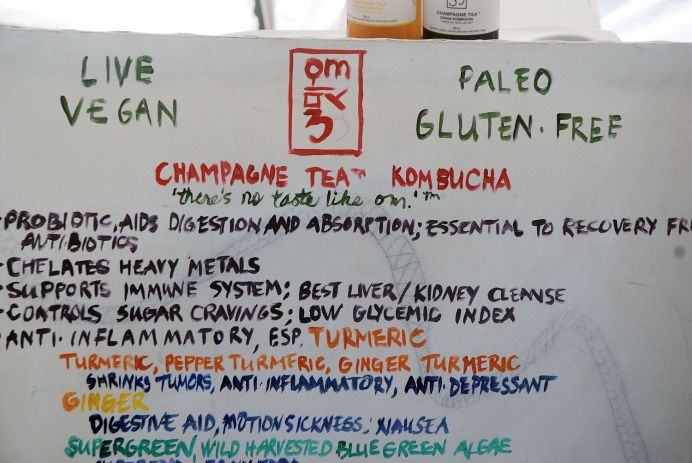 Oh, and then there’s Paleo, a fad diet hatched to sell books and allegedly (and inaccurately) presented as the “healthy diet our ancestors ate.” Well it isn’t. Plants and animals have evolved since those times, and so have we. We can’t eat the plants they ate, because they no longer exist. And we have evolved to tolerate lactose and (most of us) can have dairy products. The idea that our ancestors didn’t eat gluten is silly. It depends on where they lived. If there were edible grains nearby, you can be sure they ate them. Scientific American explains this here. As David Gorski explains, Paleo is part of the “naturalistic fallacy.” It provides no benefits.

Juices and the Cleanse 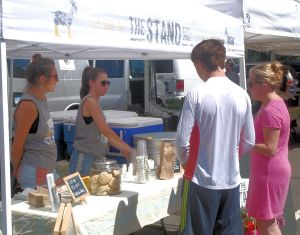 Of course, there had to be a representative from The Stand (not Steven King’s novel, but a juice stand). They make a lot of blended juices, some good, and some at best an acquired taste and loaded with kale. And some interesting sandwiches as well. But smack dab on the back cover of their leaflet is an advertisement for The Cleanse, a crazy regime of bizarre juices that is supposed to detoxify your body (at $60 a day). It doesn’t. There is no such thing as a cleanse: it is pure hooey. Your liver detoxifies your body every day, and juices do nothing to help. Don’t waste your money! 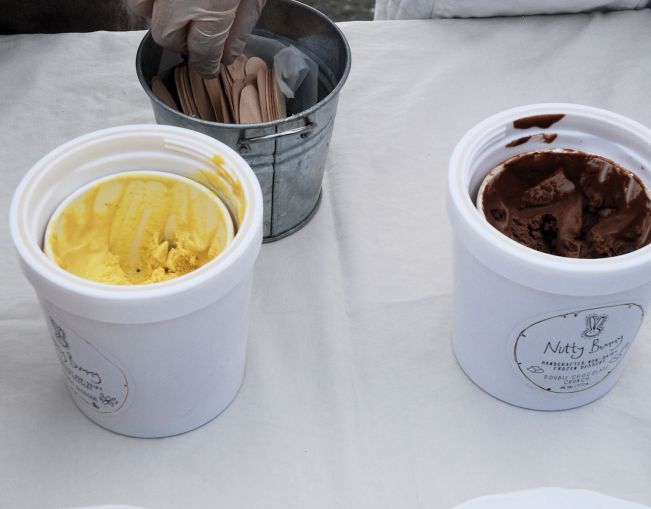 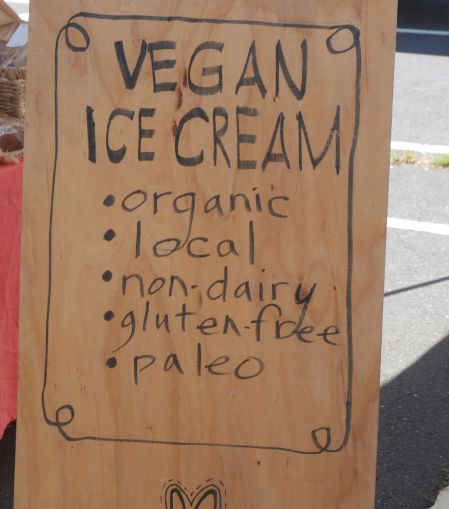 We can’t let Nutty Bunny ice cream go unmentioned. The owner, Westporter Pamela Aflalo claims to have cured her daughter’s allergies by created a non dairy diet, and then created this imitation ice cream. It’s billed as vegan, organic, non-dairy, non-GMO and 100% gluten free, touching nearly all the woo bases. It also has no artificial sweeteners. It’s made primarily from cashews, almonds and coconut milk. It costs $10 a pint, and has a kind of grainy texture. We didn’t like it at all and her claim of curing her daughter’s allergies is at best anecdotal. 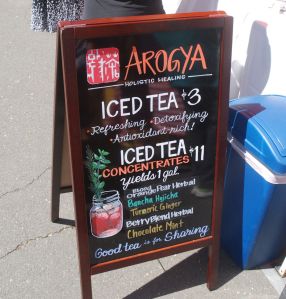 Arogya has some nice teas, but it only takes a minute before you discover that many are “healing blends,” for colon cleanses and detox (neither of which exist), kidney cleanses, liver cleanses, female vitality and other unbelievable malarkey. They also practice quackery such as cupping, acupuncture and qigong, and other Traditional Chinese Medicine, none of which has ever been show to be effective, or it would just be called “medicine.” In fact most of it was codified by Chairman Mao. 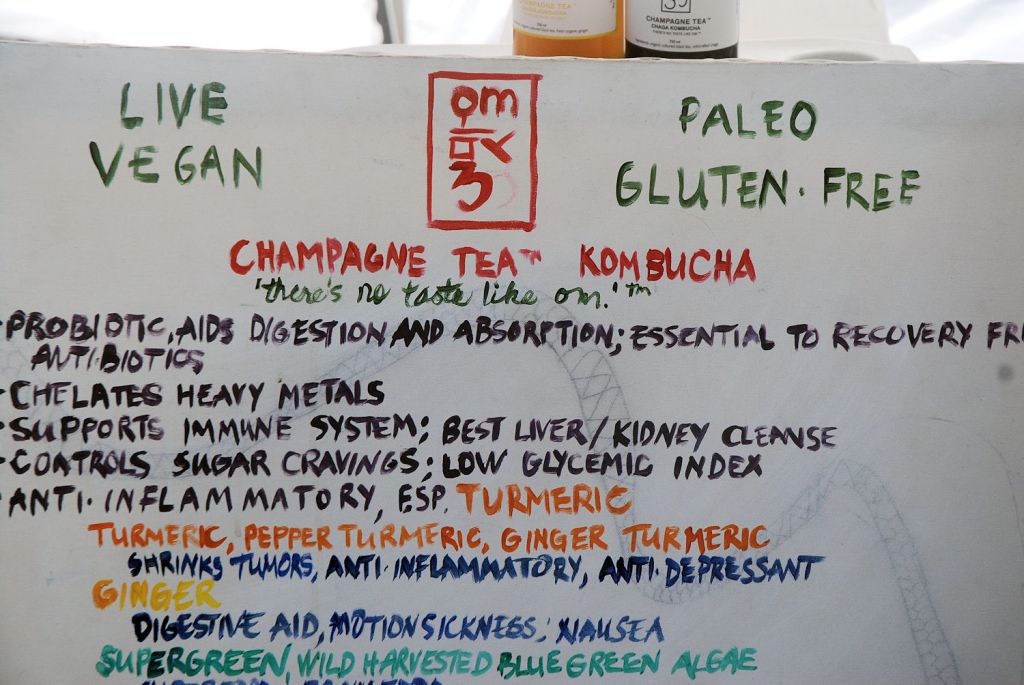 And just for completeness, we’ll show you the absolutely crazy claims made by the Om Champagne Kombucha vendor. They speak for themselves.

And we cure autism, too

Probably the scariest and most irresponsible products come from Healing Home Foods, owned by Shelley Schulz of Pound Ridge, NY. At first, their products look rather nice, with granola, cookies and (raw?) crackers on display, with some nut butters as well. They are, of course full of the usual horse feathers: organic, non-gmo, gluten free and vegan. 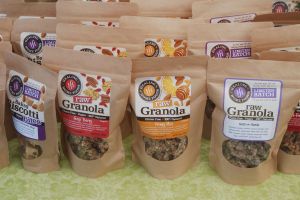 But it is only when you read their label or web site that you discover their bizarre ideology. Schulz claimed to improve her autistic son’s condition by removing “dairy, gluten, grains, sugar, starches and preservatives,” and developed even more raw/vegan dietary nonsense when her husband developed cancer. None of this can actually work, of course, and you should be aware of anyone making such claims. 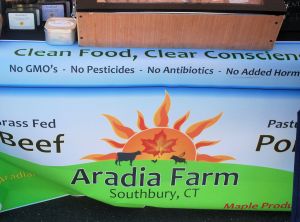 And look, Aradia Farm, there are no antibiotics in your meat. None. Not allowed. See Amanda Zaluckyj’s explanation. And all beef contains some hormones whether growth implants are used or not, but the estrogenic activity in been is far less than in other common foods. 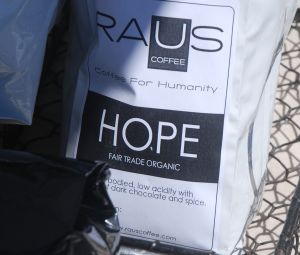 And finally, vendors like to make claims about Fair Trade, especially in coffee products. It turns out not to be such a great idea as we reported. We don’t know what the quality of Fair Trade coffee beans is: farmers are likely to be selling their lowest grade beans to fair trade brokers, since the floor price is guaranteed. Growers are paid very little more for such beans, but the Fair Trade organization makes a nice profit on it. It is essentially a marketing organization, not one that benefits poor farmers.

Westport Farmer’s Market is a sincere operation, but not all the vendors are in any way sincere. Some vendor debunking or cleaning might be in order.