One thing you ought to be able to do really well in an Instant Pot is a stew, and while a lot of stews are really cold weather dishes, we decided that Coq au Vin would be fine in the fairly hot weather we are still having.

You can make this chicken wine stew using either red wine or white wine, but be sure you use a wine you would actually drink, since a cheap wine might well add an off taste to the resulting stew.

This recipe, adapted from Craig Claiborne’s The New York Times Cookbook, starts by flouring and browning the chicken pieces in oil and/or butter. We used olive oil. While you could do this using the Instant Pot Saute setting, you could only do a few pieces at a time, and would get another dish dirty while you cooked the other pieces, so we browned the pieces in a skillet before potting them up. The original recipe also called for 2 oz of warmed brandy to flame over the chicken before cooking, be we discovered we were out of brandy.

4. Add the wine, close the pot, make sure the steam vent is closed, and press the Poultry button.  The pot will heat and cook under pressure for 15 minutes.

5. Release the steam, remove the chicken pieces and mushrooms to a serving bowl and thicken the sauce with arrowroot or cornstarch slurry.

6. Put the sauce over the chicken and serve right away with rice. 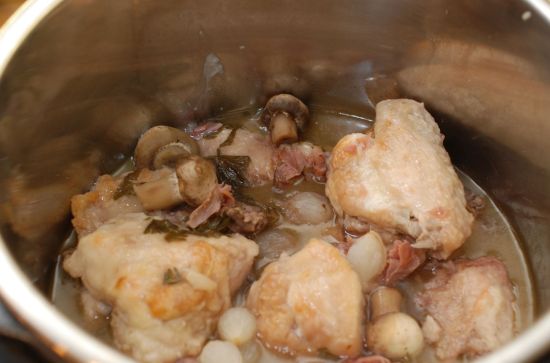 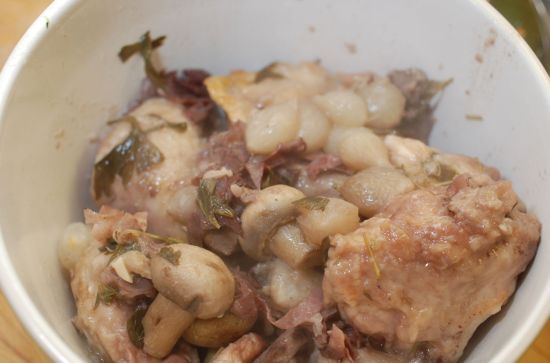 We noted two things about using the Instant Pot on chicken: the dark meat is cooked correctly, but the white meat is overcooked. Since you can’t easily remove the white meat pieces while it is cooking, it is best to use all dark meat. If you use all white meat, you would need to reduce the cooking time to about 10 minutes.

Chicken fat on the skin does not render out very well in a pressure cooker, so it is better to remove the chicken skin before flouring and browning. Otherwise, you may end up with pieces of “flubber” in your stew.

2 thoughts on “Coq au Vin in an Instant Pot”