This relatively simple recipe can be done in less than an hour, and makes a rich, filling meal. There are several steps that you can do ahead and none are all that complicated. The original inspirational recipe came from Milk Street, (and is the first one we wanted to actually make). That recipe suggests garnishing the soup with fried shallots. Don’t even try this: it will small up your house for days, and are very hard to keep from burning. You can buy them packaged at Asian markets or online.

The components of this soup are: 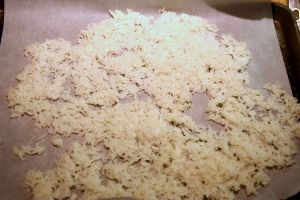 Jasmine rice is a delicately scented short grain rice, that you should make first and allow to cool on a plate or baking sheet. You will add it to the soup when the rice is cold, so it doesn’t break up to much when you stir it in. Cook about 1 cup of rice with the package’s amount of water. In our Instant Pot rice cooker, we added 1.25 cups of water and cooked it for only 10 minutes. Open the pot and spread it out to cool.

Set out 3 eggs. Place a vegetable steamer in a 2 quart sauce pan and fill with water until just below the steamer bottom. Bring the water to a boil, and quickly lower the eggs into the steamer using a slotted spoon. Cover and cook 6.5 minutes. Run cold water into the pan to stop the cooking, empty and add more cold water. Pick up each egg and run cold water on it until no longer warm to the touch. Crack each egg and peel under running water. Set aside the peeled eggs.

Mix the pork and sauces in a small bowl and make around 10 balls using a small cookie scoop. Put them on a plate and refrigerate for 15 minutes or so.

Ladle in bowls and decorate with the halved soft boiled eggs (cut them right in the bowls), lime wedges, and the optional fried shallots. Packaged onion rings are a good substitute, too!

Serve at once to your admiring guests.

Let’s start with a homely example. If a friend comes to you claiming to have a wonderful new pudding recipe, made only from grass clippings, your first response would be “how would that work?” You know that grass is really fibrous and doesn’t have a lot of flavor.

So, if another wacky friend comes to you claiming that cell phones cause cancer, you could ask the same question: “how would that work?” Because you know that the microwaves used in cell phones are so low in energy that they cannot disrupt any chemical bonds.  Prominent physicist and educator Bob Park dealt with this in 2001, in the journal article “Cell phones and cancer: how should science respond?”

As Park points out, all known cancer causing agents work by breaking chemical bonds, producing mutant strands of DNA. The energy of such elector magnetic radiation runs from low energy microwaves through the visible spectrum, up to ultraviolet and eventually to X-rays, with the energy is determined by the wavelength, with the shorter wavelengths being more energetic. Only at the ultraviolet wavelengths and beyond do the photns that make up such radiation have enough energy to break bonds. Microwaves, infrared, and visible radiation just can’t do it, and thus, cannot cause cancer.

Knowing that one simple fact makes it easy to question alarmist articles like the one in last week’s issue of The Nation, on a conspiracy theory on how Big Wireless made us think cell phones are safe.  The report, by Mark Hertsgaard and Mark Dowie details a conspiracy to shut up cell phone critics, which even if true does not establish the cell phones are dangerous. It is simply another example of The Nation reporting outside its political specialty, but ignoring established science.

But why believe Park and me? The American Cancer Society has a high readable report:  Cellular Phones that comes to the same conclusion.

But what about if you are in a room full of cell phones and make hundreds of calls a day? Is that any more dangerous? What about Michael Cohen’s 16 cell phones? To answer, consider the following thought experiment, which, I think, came originally from Bob Park.

What happens? A lot of rocks fall into the water, but none get to England, because none of the soldiers is strong enough to throw a rock 21 miles. The same applies to all those cell phones. None can break a bond so even the whole group can’t cause cancer.

Hertsgaard and Dowie cite a well-designed 2016 experiment by the National Toxicology Program in which rats are raised in specially designed crates where they were irradiated with 2 different levels of cell phone radiation (or none for the control group)  for 10 minutes on and 10 minutes off for 9 hours a day, from birth to 2 years. Some rats got CDMA modulated radiation and some got GSM modulation. The original 2016 report was described in Scientific American, and it raised some concerns.

The final revised 2018 result, after adjusting for litter effects, was that there was no positive association between cell phones and brain neoplasms for female rats, male mice, or female mice. They found an association for male rate and only for CDMA modulation. Further, the irradiated male rates lived longer than the controls. In other words, this appeared to be a random effect of no significance. All of this is explained in detail in an article on Science Based Medicine.

While earlier 2016 preliminary analyses seemed to indicate an actual effect, it disappeared when the statistics were adjusted for litter effects (animals from the same litter would be expected to have similar responses).

So, physics is still true, and alarmism has lost out again. Your cell phones are safe.