The Schoolhouse at Cannondale always serves delicious, creative food, but Thursdays are a real bargain when you can get a 4-course meal for $49. If you want a different wine to accompany each course, it costs $85, but if you just order some wine by the glass the whole evening is an astonishing bargain.

Last night’s menu gave you two choices for each of the four courses, which explains why the menu is so inexpensive: there are only eight dishes to prepare.

For the first course, one choice was a Kale and Cabbage salad with almonds, pickled shallot, golden raisins and Umami vinaigrette. While it looked pretty salad like, it was a bit more like a fruit salad, with the raisins cutting the bitterness of the brassica, and quite tasty.

The other first course was a Curry Carrot Soup (above) with a coconut-peanut granola and Black Sheep Yoghurt. This was a spectacular success, and I can’t wait to try to duplicate it as it was utterly delicious, with the smooth carrot soup and curry contrasting with the nutty granola and swirled with the yoghurt. 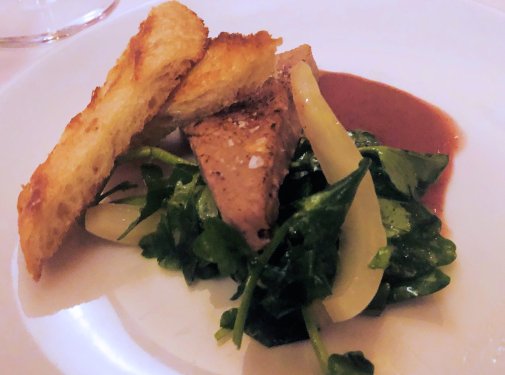 For the second course, you could choose Torches French Raclette Cheese, with Currant-Apricot Mustardo and Wave Hill Toast, or Pork Rillette, Pickled Fennel, Raisin Verjus, toast and watercress. Eating the warm Raclette by spreading it on the toast with a little of currant-apricot mixture was an unexpected experience, and the Pork Rillette was a smooth spread that also nicely set off with the Raisin Verjus and Fennel.

For the third course you could order either Bronzini with toasted farro and Juilienne vegetable en Blanc, Fennel-Tomato broth and Kalamata Olive tapenade, or Roast Pork Loin with Horseradish Spätzle, Brussels Sprouts and Caraway-Beet Coulis. We both ordered the pork loin, so you get only one picture. We particularly were pleased with how tender and juicy the pork was, as many other restaurants tend to overcook it. This was just right, and the Spätzle were a really great idea and went well with the Brussels Sprouts. 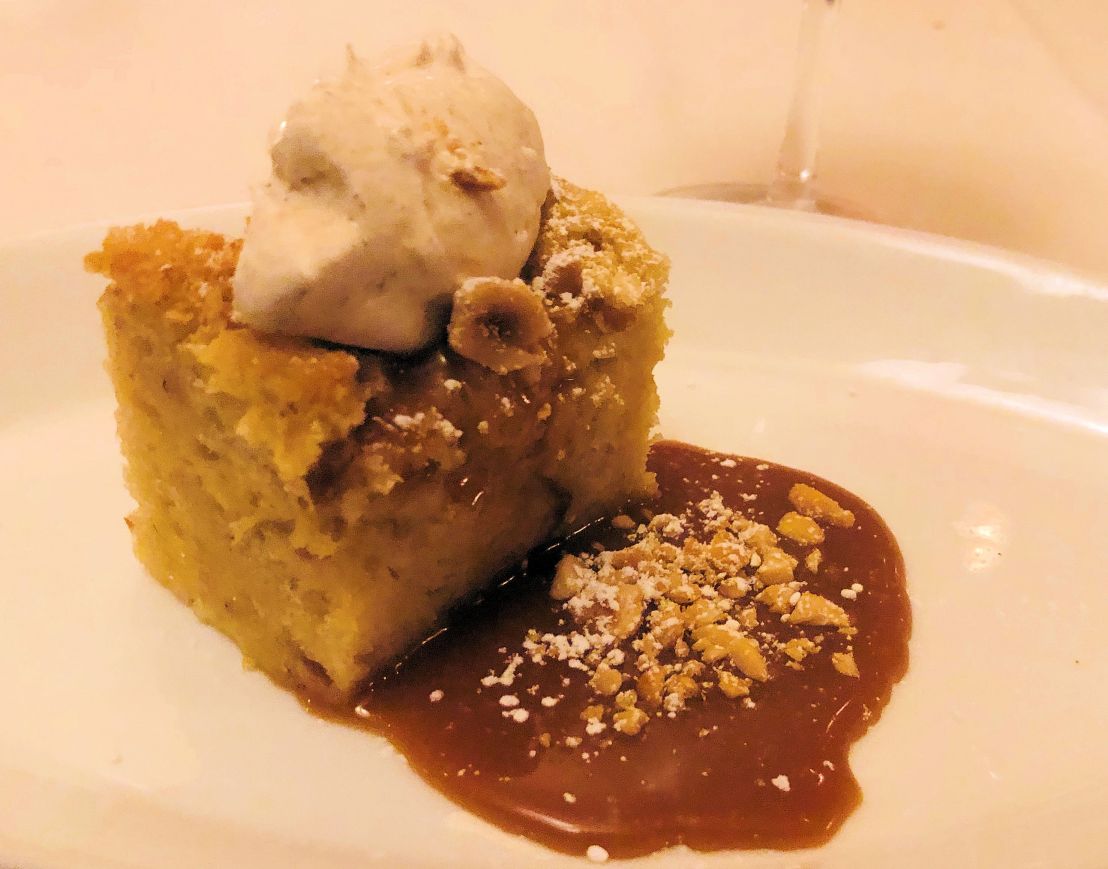 Finally, we could order either Bread pudding with salted caramel sauce, peanuts and cinnamon whipped cream, or Maple Panna Cotta with cranberry chutney. We both ordered the bread pudding which was apparently made from Wave Hill bread, too, was a lovely finish to the meal.

We couldn’t have been happier, and now that we know their “secret,” we’ll come back on Thursdays in the future!

Here is a great holiday pie recipe that takes only minutes to make, although it does take several hours to chill. Warm it back to room temperature when you serve it, to make cutting caramel easier, and use a warm knife.

Depending on whether you make this in a tart pan or a pie pan, this is a tart or quiche, but is simple and delicious. And, for holidays, it is easily transportable. Save the Maldon salt until just before serving so it doesn’t dissolve in the ganache. 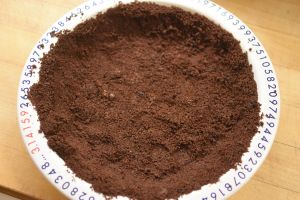 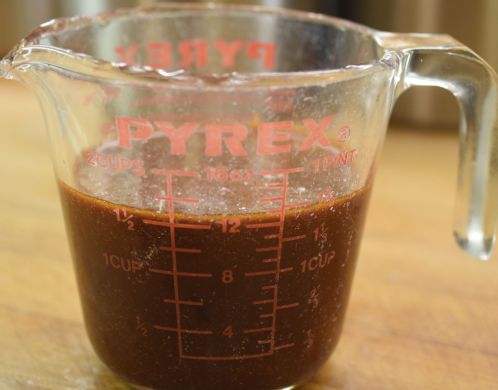 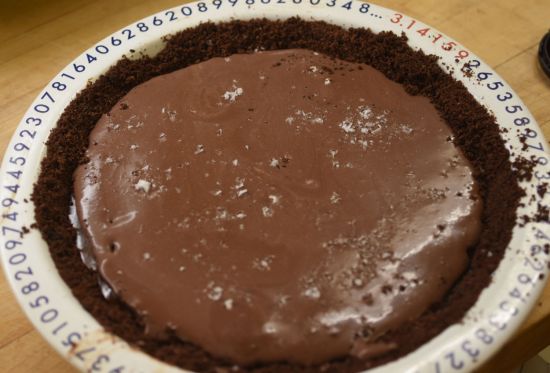 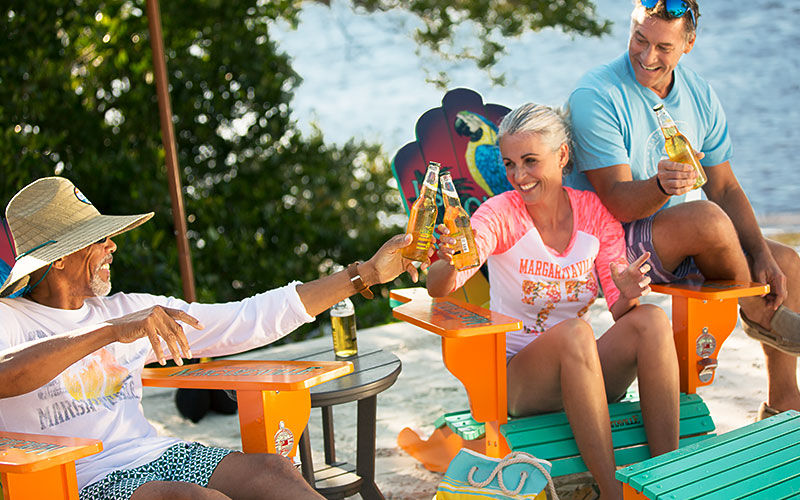 Margaritaville is a 1977 Jimmy Buffett song that despite its simplicity became a huge hit for Buffett. It’s essentially a mournful break-up song set to what Buffett himself calls “drunken Caribbean music.”

Cashing in on what turned out to be his biggest hit, Buffet franchised a series of Margaritaville restaurants, serving middling but undistinguished American food and less than distinguished service. There are now about 30 of them, mostly in the South, but there is one at the Mohegan Sun in Uncasville, CT.

Not to stop there, his company has franchised Margaritaville Resorts, mostly in the South and Caribbean, but there is one coming to New York City as well. These are hotels with pools and the Margaritaville restaurant featured, along with some sort of entertainment.

But now, we learn that his franchising organization has formed a new business for “55 and over”: senior living. The first of these is in operation in Daytona, call Latitude Margarita. Another has also opened in Hilton Head. We learned about these from an article in this Sunday’s Times Magazine. This is a development for the 55 and over crowd of homes ranging from $200K to $300K in a senior living community for “active residents,” which is or will include a Town Center with shops, concerts presumably other activities.

One Yelp reviewer said it was like being on a permanent Carnival Cruise with noisy neighbors! And a real estate expert said “I see the appeal, but it has a good chance of wearing out quickly.”

The problem I have with all of this is that even though we fit their age demographic (and then some), the idea of an age-restricted community with no young adults or children sounds stultifying. You keep young by interacting with younger people, not getting snockered on salted Tequila drinks every night.

And just how much activity is there really? Are there singing groups you can join? Are there wood working and other crafts available? What about community theater, where seniors really tend to thrive?  And to tell you the truth, we prefer gin and tonics!

Oh, and that beach they show in all their brochure. It isn’t on the property. It’s a shuttle ride away. 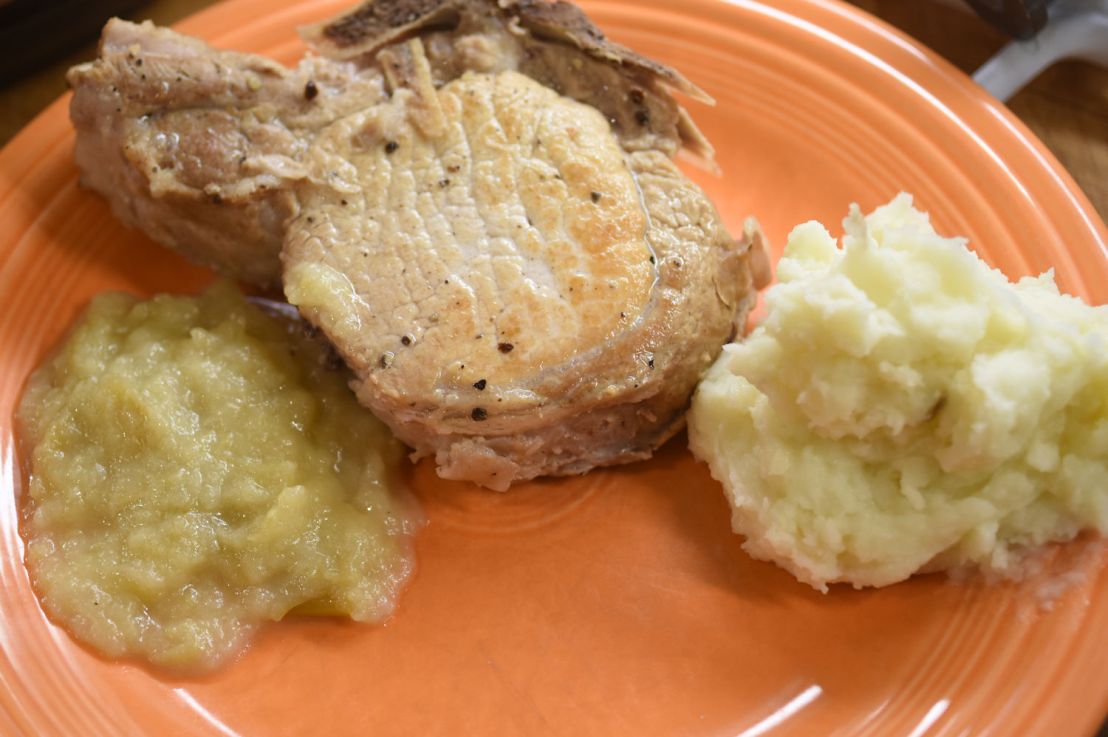 The Instant Pot is the ideal way to make pork chops without drying them out. This is a problem since most commercial pork is very lean. Even when you use a premium product like Chairman’s Reserve, you have to take care not to overcook the pork. Your pork will be juiciest if you remember that it need only be cooked to 137˚ F and not to the ridiculously high temperatures of yore.

We bought two large double chops to illustrate the technique. 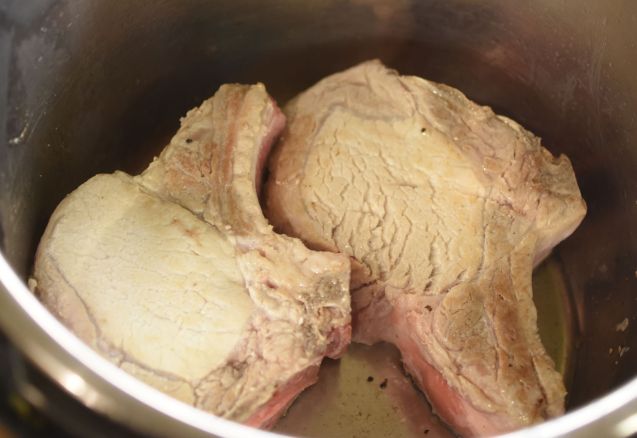 5. Close the pot and set to Manual for 10 minutes
6. Let the pressure reduce slowly (NPR) and open the pot.
7. Remove the chops and keep them warm
8. Pour out the apple juice and any other juices.
9. Puree the apples using an immersion blender. This also chops up the peels into the applesauce.

Serve the chops with a side of applesauce.

It is important that you let the pressure reduce slowly so that the meat juices don’t boil off. In this case, the pot was back to normal pressure in about 10 minutes.

The resulting chops were very tender and juicy. We measured the temperature of the two chops: it was nearly 165˚ F, so we suggest that for these large chops, 8 minutes would have been enough, and for smaller, single chops, 5 minutes is probably plenty.

The applesauce is very good with the pork chops, but is probably a bit porky to eat later by itself, so don’t overdo it. 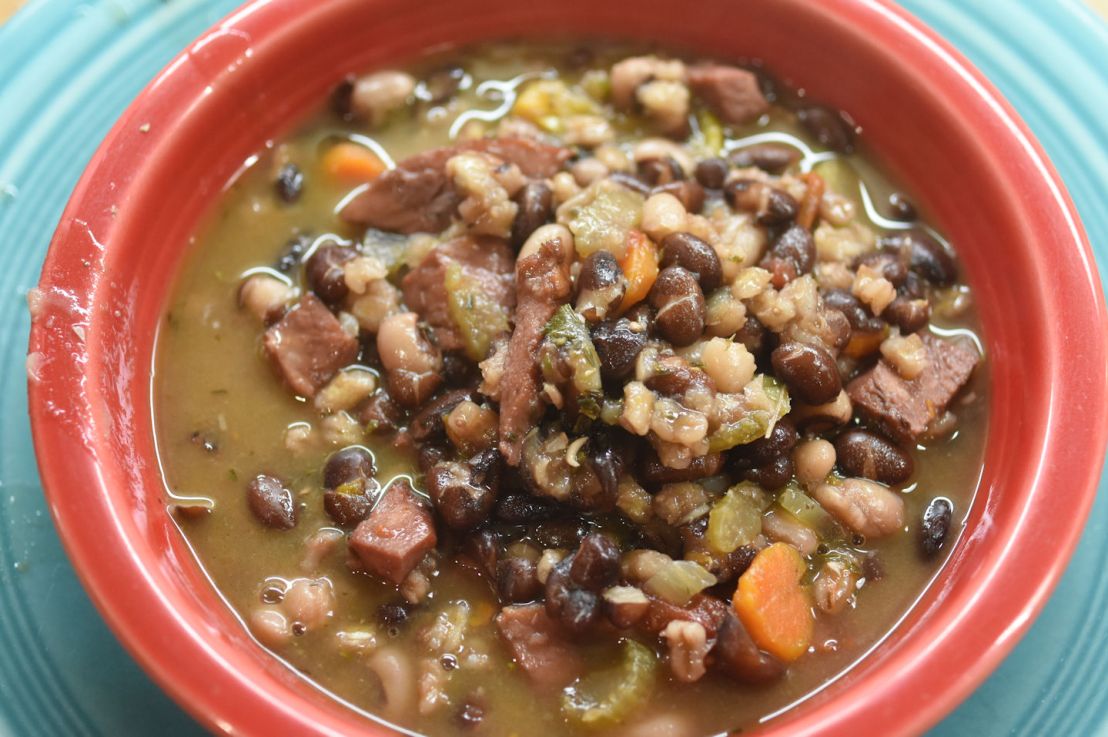 What’s in that bowl?
It’s bean soup!
I know, but what is it now?

That old Benny Hill gag always comes to mind when we make or eat bean soup. A nice bowl of beans, veggies and stock with a little meat added can make a really delicious and nutritious meal. You can use one type of beans or a mixture. And the whole cooking process takes only about an hour, completely unattended.

We started with Bob’s Red Mill Black Bean Soup Mix. This has about 5 kinds of beans, but no seasonings or veggies: those are on you. It has for many years been customary to soak beans overnight before cooking them. This is supposed to make them more digestible and reduce flatulence. But this is controversial, and you probably don’t need to do it.

Nonetheless, for our first Instant Pot bean project, we soaked them over night. Next time we’ll omit that step and just cook them a little longer. We took two cups of the bean mix and rinsed them off under running water, and then soaked them for 12 hours over night, and then rinsed them. You would need to do this rinsing anyway to remove agricultural debris. The beans will have at least doubled in bulk while soaking.

Then we used them as described below. 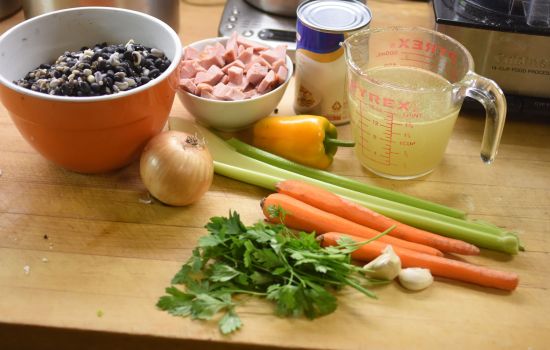 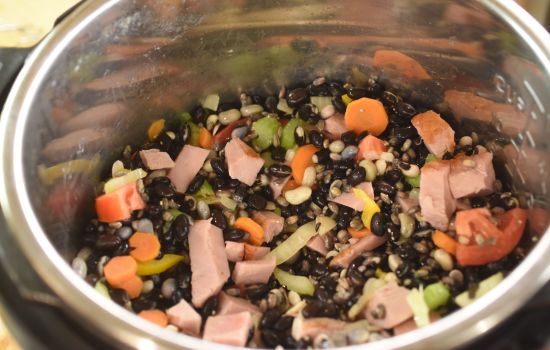 Serve in bowls, with crusty bread on the side. Makes around 4 servings.