Atlas BBQ and Fish opened in late June on Pleasant St, and thus missed being in this year’s island restaurant guides. However, when people heard that it had the same proprietors (Brandt and Gabrielle Gould) as the late, lamented Cambridge Street, customers began to come anyway. And it is safe to say that this new establishment offers the island’s best barbecue in somewhat fancier surroundings than their first restaurant.

Atlas BBQ and Fish has just a small sign and is easy to miss, but it is right next to the Island Pharmacy and across the street from the side entrance to the new Stop and Shop building. There is parking in front and alongside the building.

Like most barbecues, you can easily order a lot more food that you can eat. They offer a platter with brisket, ribs and pulled pork for $30, but you won’t be able to finish it all. You are better off ordering one of their seafood appetizers and one of the pork dishes.

We ordered a delicious lobster salad with orange, pineapple and lemon and Bibb lettuce ($20). The fruit flavors went very well with the lobster and overall it was quite successful. 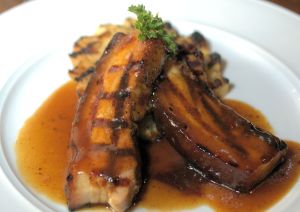 We were determined to have the pork belly ($16), but worried that it might be too similar to the ribs, but it was quite different. The sauce was made from honey and pineapple, and served with grilled pineapple and was excellent.

We both ordered the Smoked, then Wet Sauced Barbecued Ribs ($26), which were served with a cheese biscuit, Napa slaw, Red Beans and Rice, and half a grilled banana. These were the tenderest ribs we’ve had on the island, and probably anywhere and we’ll be sure to come back just to have them again.

We can’t say enough good things about the food at Atlas: the ribs are simply excellent. They also offer Branzino, Swordfish and Red Snapper, but we’ll probably continue to go for the barbecue.

Our only real suggestion is that they provide a “boneyard” discard plate. 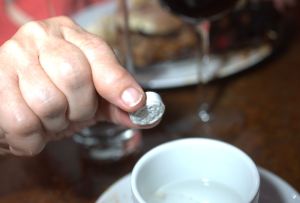 The finishing touch is a clever little pill that you drop into a cup of warm water and it expands into a wet wipe. That was a fun ending to the meal!