Some people who have less information about biotechnology have asserted that animals won’t touch or eat GMO corn, and only non genetically modified corn. This is pretty unlikely on the face of it, since farm animals have been feed GM corn for nearly 20 years with zero problems. In addition, GM corn is identical in smell, taste and nutrition. However, some people have published such claims here, here and here.

We carried out an early experiment in 2013 to illustrate that this is not the case, finding the squirrels and chipmunks had no such preferences. However, we had no way to know exactly which corn varieties we were buying at the supermarket, and a more controlled experiment seemed desirable.

The non-profit organization Biofortified has undertaken a very large controlled Citizen Science experiment of the same kind, but using corn isolines. The GM corn and the non-modified corn are exactly the same breed, but one of them has had genes added to create Bt insecticide and  Roundup resistance. The corn was grown by Monsanto for Biofortified in two adjacent fields in Hawaii, separated by the usual buffer zone, so the climates were as identical as possible.  You can read more about the experiment here. 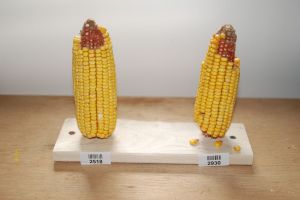 Then volunteers were recruited on line to order the corn kits and see how wild animals like them.  We are one of about 400 such experimenters who donated money to cover shipping and are now part of the experiment. Each kit comes with 4 ears of corn, two marked Experiment 1 and two marked Experiment 2. Each ear of corn comes with a numbered bar code label to distinguish it. However, you do not know which are GM and which are not, other than one of the two ears in each experiment is GM and the other not.

We did our first experiment this weekend, and found that the squirrels (and maybe 1 chipmunk) ate all of the corn starting with the ear with looser kernels, but eventually ate all of both of them.

This is a fun experiment for you to try, too. It is suitable for both children and adults and could make an interesting Science Fair project. There are still a couple of hundred kits available, and you or your family can join in the experiment by going to the Biofortified web site.

During the experiment, you are asked to take pictures and log observations on their web site, and report the beginning and end weight of each numbered ear. When the experiment is concluded, you will have a chance to see the results, and a paper on this work will be published.

One thought on “The Great GMO Corn Experiment”