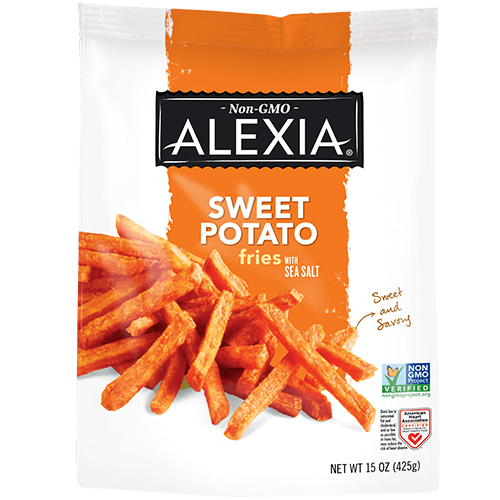 If you look at the packaging for Alexia Sweet Potato Fries (which are actually very good) you will see “Non-GMO” and that annoying GMO Free butterfly label.  This is called fear-based marketing. We don’t use that scary GMO stuff (whatever that is) in our potatoes. But in the case of sweet potatoes, nature beat them to the punch.

Farmers breed plants all the time to get new, stronger and tastier varieties by crossing them. This is tricky because you usually then have to “back-cross” your new variety with its parents to make it more like its parent. And this can result in exchanging of over 10,000 genes! This was the way the pioneering plant biologist Norman Borlaug bred the wheat that saved Mexico and later India. For this he was awarded the Nobel Peace Prize.

Another way farmers and breeders have used is irradiation of seeds. This is kind of a crude technique, called mutation breeding, but it is how we got the current Ruby Red Grapefruit. You just have to plant the seeds and see what comes up. Then you save the good ones.  You can also perturb the seed using mutagenic chemicals (such as colchicine) to cause it to mutate. This is just as uncertain, but we have gotten a lot of nice flowers and a few vegetables that way.

The last way is using biotechnology to insert just the gene we want for the trait we want. This is the most precise method, but not everyone (except most scientists) is convinced that there aren’t some sort of unknown side effects. They usually use a bacterium called “agro” (for agrobacterium tumefaciens) which is a sort of a ring of DNA called a plasmid. This bacterium can insert genes into plants, and that is where the bulges come from you see on oak trees, called oak galls.

Now if biologists make that ring of DNA longer by including the genes they want in the plant they can persuade agro to do their insertions for them and this is the way most genetically modified crops are made today.

Here’s the news. This wasn’t our idea! That intellectual property belongs to a sweet potato! Virologist Jan Kreuze of the University of Washington in Seattle reported that they examined the genes of some 291 varieties of sweet potatoes from around the world, and found in all of them foreign genes from bacteria. Further, they found genetic sequences analogous to those in agro. And while they found these in sweet potatoes, they did not find them in close relatives.

Now, sweet potatoes are just the swollen parts of the plant’s roots and the authors theorize that this modification is what gives sweet potato plants this bulge; both are lacking from the close relatives. So sweet potatoes did their own “genetic engineering” some 8000 years ago, and farmers selected the plants with the best “bulge” to plant each year. And clearly after 8000 years we can be pretty sure there are no ill effects from eating them.

This is a pretty good indication that such genetic modification is perfectly safe, and every major scientific organization world wide agrees that this is true. You can find declarations from the AAAS, the AMA, and the EFSA.  Every major scientific society and national scientific organization has indicated that GMO foods pose no harm of any kind. Here is a good review in Scientific American by Pamela Ronald. And the position of the American Association for the Advancement of Science is very clear in stating that GMO crops pose no harm.

So, ignore those meaningless “non-GMO” marketing labels, and avoid products making those specious claims when you can. You may actually save money, too.