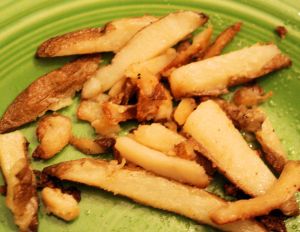 We were quite taken with this French Fry recipe that suggested that you could make lower fat French fries in your slow cooker. You could avoid doing a bariatric surgery on those. The author says you cut up the potatoes; add salt and your choices of spices, and about 1/3 of a cup of olive oil for 3 lb of potatoes.

Well, we had to try this, so we took 2 large potatoes (about 1.5 lb) and cut them to French fry size, added salt and around 1/6 cup of olive oil and tossed them in our Instant Pot. We set the pot to Slow Cook and the highest temperature setting (high) as recommended by the recipe.

We set the slow cooker to 3 hours, and put the lid on (a glass lid, not the pressure cooker lid)m and stirred them once or twice an hour.

After 3 hours, we had cooked, limp, white potatoes, but nothing like the French fries in the recipe’s picture. We even tried switching to the Saute setting, but this would not brown them either. Either her recipe doesn’t work at all, or it doesn’t work in our Instant Pot, which may have different heating characteristics than her slow cooker.

But we made great potatoes anyway!

We were making hamburgers anyway to go with these failed fries, so we just tossed the potatoes on the griddle, adding a dab of butter for flavor and browned them. This made the most delicious home fries we’ve ever made!

Well, if you think about it, this really says that cooked potatoes maker better home fries, because all you have to concentrate on is browning them: you don’t have to cook them too!

And you can make those cooked potatoes in the Instant pot pressure cooker in about 4 minutes. Add a cup of water, and place the sliced potatoes on the trivet or in a vegetable steamer. Cook 4 minutes and release the pressure right away. Then, dry off the potatoes and brown them on the griddle. They will be great. You could also add bacon or onions at this point to flavor the potatoes. But you will definitely have great home fries with very little work.

And a cast iron frying pan would work as well as a griddle. And you could use a vegetable steamer for a couple of potatoes. For more, use the Instant Pot. 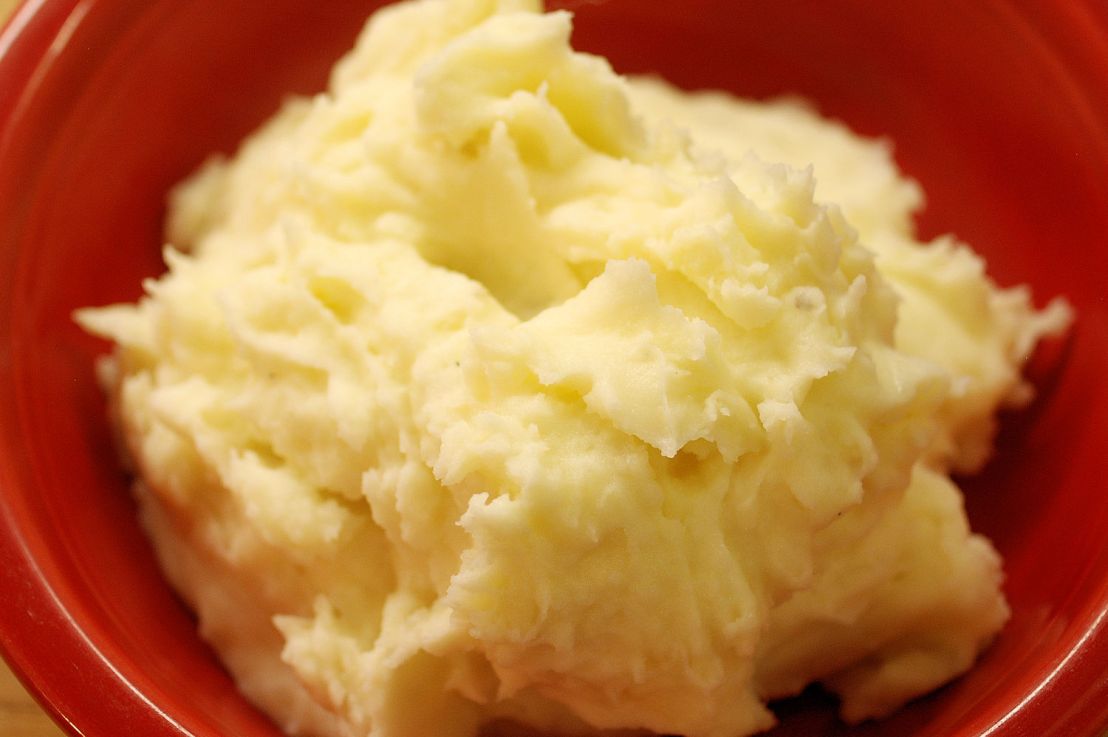 It’s not that using a pressure cooker for mashed potatoes is faster,  it’s that they taste better. Once you’ve made mashed potatoes this way, you probably won’t boil them in a pan ever again!

Here’s all you have to do.

2. Place the potato pieces on the trivet inside the Instant Pot, and add 1 cup of water.

3. Close the pot and vent, and select Manual for 13 minutes. Then, vent the pot right away using Quick Release. You don’t want them to overcook. Check them with a fork, to make sure they are cooked through.  If they are not (unlikely) you can close the pot and cook for 2 more minutes. 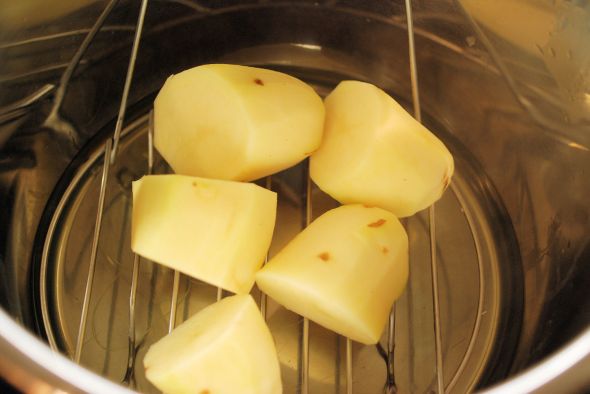 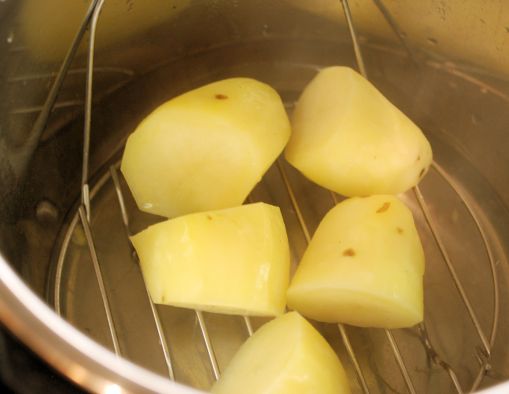 4. Remove the potato pieces and put them in a mixing bowl or stand mixer bowl. Do not use an immersion blender.

5. Beat the potatoes for a minute and then add butter 2-4 Tb, salt and pepper.

6. Beat in the butter, and then add up to ¼ cup of buttermilk and beat until smooth.

Some people bake their potatoes in the oven, wrapped in foil or not and some use potato spikes to speed up the process. Others cook potatoes in their microwave oven and other use their charcoal or gas grill. We decided to compare the three basic methods and tell you what we found.

A baked potato means cooked using dry heat. This leaves out the possibility of using a pressure cooker, which steams the potatoes, giving quite a different result. But it turns out that if you wrap your potato in foil, as many do, you are actually steaming the potato using the moisture trapped inside the foil. And there is a difference in the result. 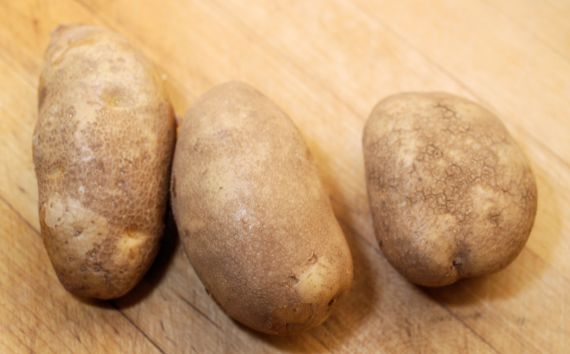 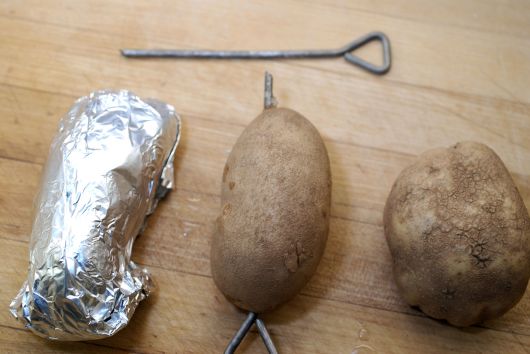 We took 3 russet potatoes each weighing around 200 grams. One we wrapped in foil and one we left unwrapped but inserted a potato spike in the middle to help heat transmit to the center, speeding up the cooking process.  You can get these spikes on Amazon for about $6.50 for 6, and at many hardware and cooking stores as well.

We set the oven to 400° F and baked the potatoes until inserting a fork indicated they were done. At 400°, the spiked potato took about 40 minutes, but the foil-wrapped one took nearly 50 minutes. You could expect these times to be about 10 minutes less at 450° F.

Then, for comparison, we pricked the third potato about 8 times with a fork and cooked it in the microwave oven for 5 minutes. When we removed this potato, it was wrinkly and shriveled, presumably because the microwave process forced more of the potato’s moisture out as steam. 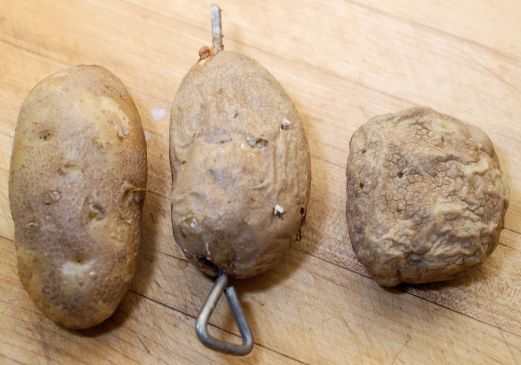 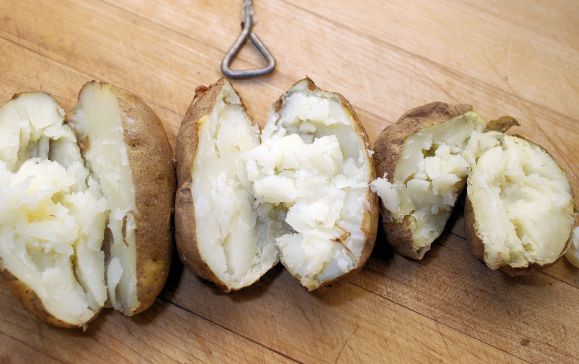 All of the potatoes came out rather differently. The baked potato with the spike was flaky, tender and flavorful. The foil-wrapped potato was mushier, and took 10 minutes longer to bake, which makes foil a silly idea. The microwaved potato was the worst of all, being the mushiest, and having an odd off-taste, perhaps picked up from the peel. It was truly terrible. 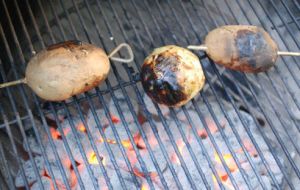 If you want to grill your potatoes, add spikes and throw them on the grill, near, but not on the actual fire source. Yes, the outsides will blacken a bit, but it is worth it for the improvement in flavor and texture. A baked potato should be flakey, like many politicians, but not mushy like some other politicians. It will have a nice pleasing texture and a much better flavor. We found that grilled potatoes took about 20 minutes and had an excellent flavor and texture.

Our conclusion: only the oven and grill make an actual baked potato. Foil wrapped takes longer and is mushy, and microwaved potatoes are the worst of all. 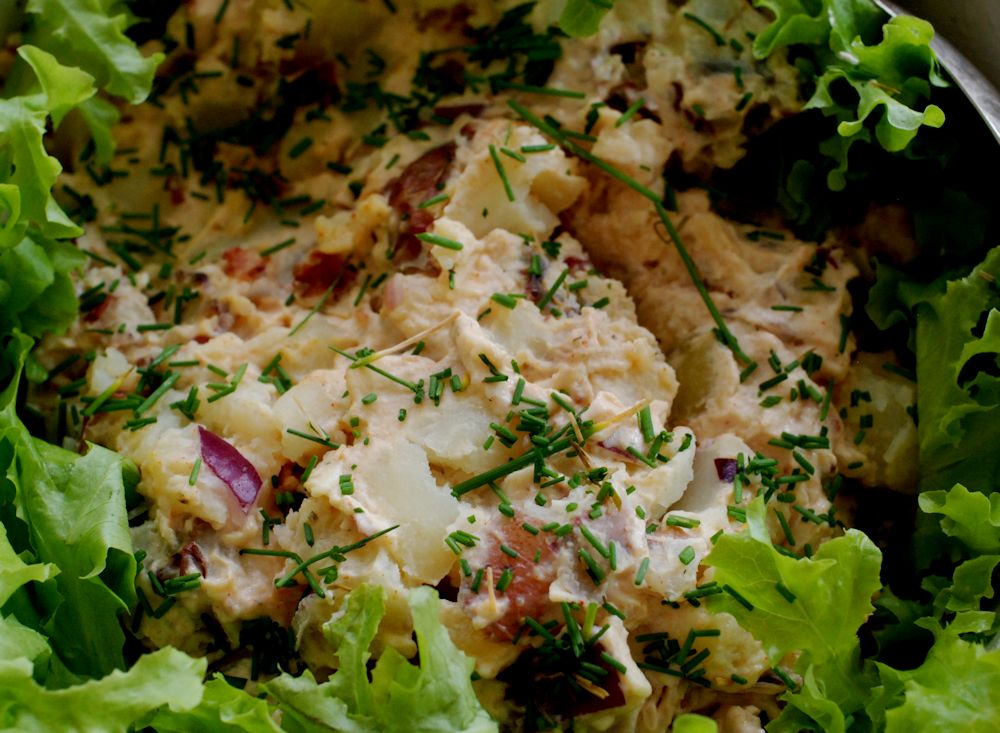 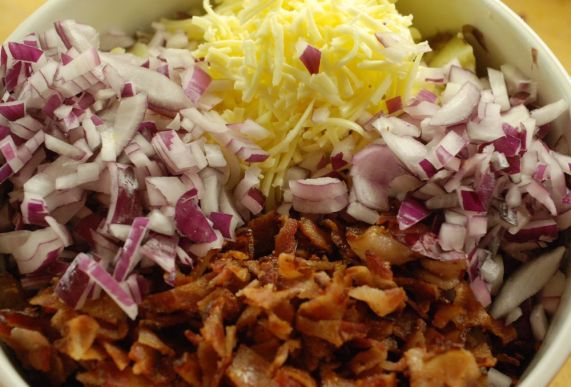 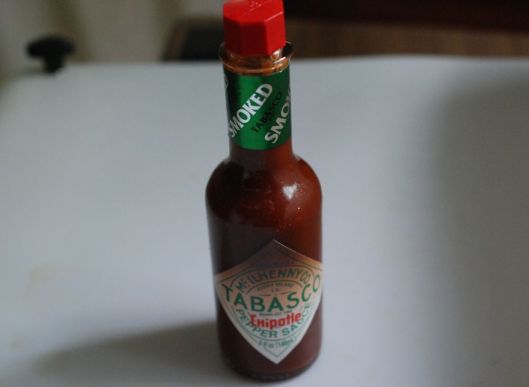 Yesterday we made up this fantastic potato salad recipe, which contains cheddar cheese and bacon and a number of other yummy ingredients. Carrie Chestnutt Mess is a Wisconsin dairy farmer who blogs as Dairy Carrie, and this is her recipe. We did little except make it and  photograph it, but judging by the responses of yesterday’s guests, it is a real winner, we can’t wait to find an excuse to make it again.

This recipe calls for 5 lb of potatoes, and makes a really substantial amount of potato salad, but it is easy to cut it in half for smaller groups. Incidentally, using Costco’s Kirkland bacon, there are about 16 slices in a pound, so you need only eight slices for a half recipe. 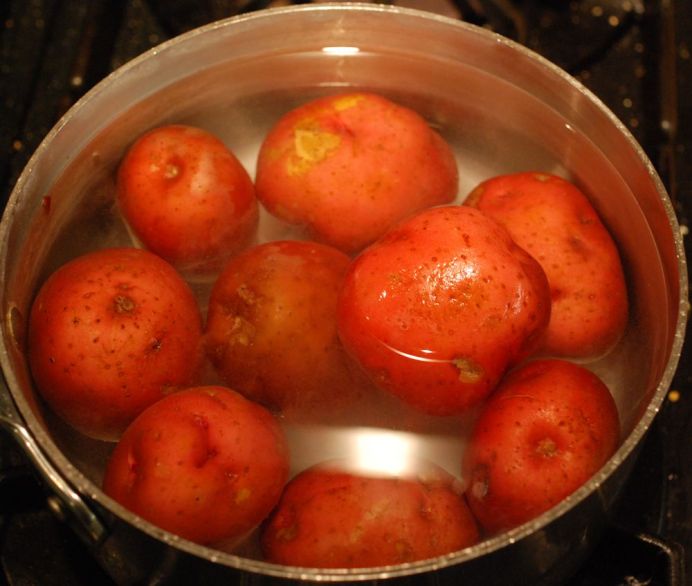 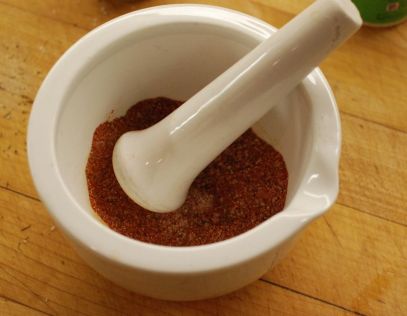 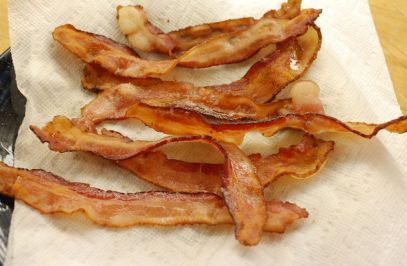 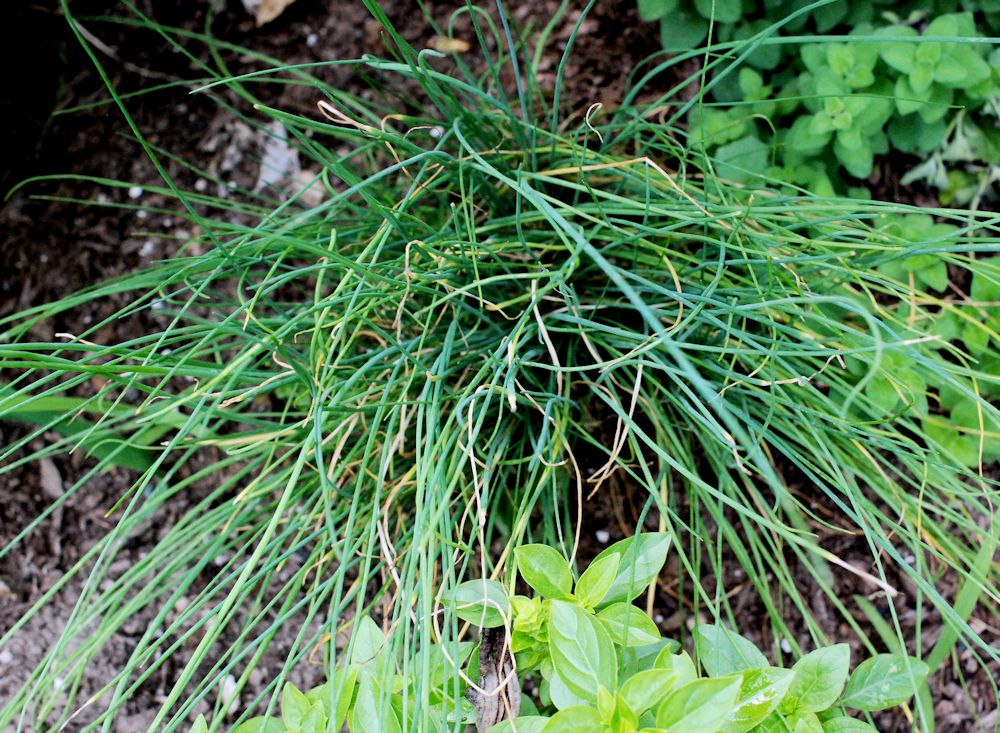 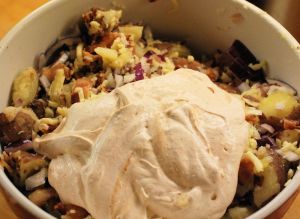 5. Add half the seasoned sauce to the bowl of potatoes and mix it all together with your hands or with a strong wooden spoon. If the potatoes don’t seem moist enough, add more of the sauce. We found it was easier to get the mixture uniform by dumping it into another bowl so the bottom of the potato mixture is on top. Then you can see how much more sauce you’ll need.

6. Put the potato salad in a serving bowl and surround it with lettuce.

7. Top with the chopped chives.

Chill and serve. They’ll love it!