The Nantucket restaurant scene was abuzz when Chef Chris Freeman sold foodie destination restaurant Oran Mor to popular island local Ned Claflin and his sommelier partner Jon Tacinco this winter. Both are graduates of the Culinary Institute, and Claflin had worked at several island restaurants previously.

The new Oran Mor opened in May, and by June had finally put their menu on line. With all entrees in the mid to high $30 range (the Angus Beef Duo is $50) this is not an inexpensive restaurant. Starter courses range for $14 to $21.

For many years, this was one of the island’s finest restaurants. With the new owners, it has a long way to go to reach those heights. The décor of the restaurant is much the same, but the table tops have been refinished in a more appealing lighter color. Other than that, even the paintings are the same.

We visited Oran Mor Wednesday night, when they weren’t particularly busy, it seemed. We were greeted by a young man in a white T-shirt, who hopped down from the high table where he was typing into his Macbook. He went to the reservation stand and told the hostess which table to seat us at. We quickly ordered 2 glasses of wine ($15 each for a pretty good Pinot Noir), and placed our food order when the wine arrived. And then…nothing. We sat at the blank table looking at our wine glasses for nearly 20 minutes, wondering if there was going to be any bread or other little amuse bouche. Nope.

Finally we asked the busboy if there wasn’t supposed to be bread. This led to a piece of Kabuki theater we’ve decided to call the “Catch-22 Bread Policy.” The busboy explained that there was bread, and it was free, but that we had to ask for it. “And we were to know that, how?” That question went unanswered. Soon after that, our waitress came by and we again suggested that there should be bread provided. She stonewalled, saying that it was restaurant policy that you had to ask for it. Shortly after that our first course arrived followed by the busboy with the bread.

The bread was 5 tiny slices of cold, dryish bread cut from a baguette, and one warm roll that was actually very good. They even brought butter. We split the warm roll, since there was only one. Shortly after that the young man in the white T-shirt came to the table to explain their bread policy. It turns out this was Tacinco, and he said that they were throwing most of their bread away uneaten, so they decided to only provide it on request (but not tell anyone)!  We believe if you price your entrees in the high $30s, you can afford to include the fricking bread!

We ordered the Beet Rosace ($16), made up of smoked beets, pickled beets, hazelnuts, dandelion, parmesan, yogurt and mizuna. It was colorfully presented, and mostly rather good, but had some patches that were extremely sour, perhaps the mizuna.

Our other starter was a half portion of Lobster Gemelli ($19) with chanterelles, corn, leeks, lobster cream and tarragon. It also seemed to include some shaved parmesan. While you may think Gemelli is a Smurf villain, it is actually a twisted tubular pasta, and probably designed to soak up sauce. Not here, though, since the gemelli was tough and undercooked, and the lobster a bit tough. And somehow, this was a really colorless dish that could have benefited from a colorful veggie or herb. As it was, it had all the eye appeal of a tuna noodle casserole! Except for the tough pasta, the flavor was quite good with a rich and interesting taste. 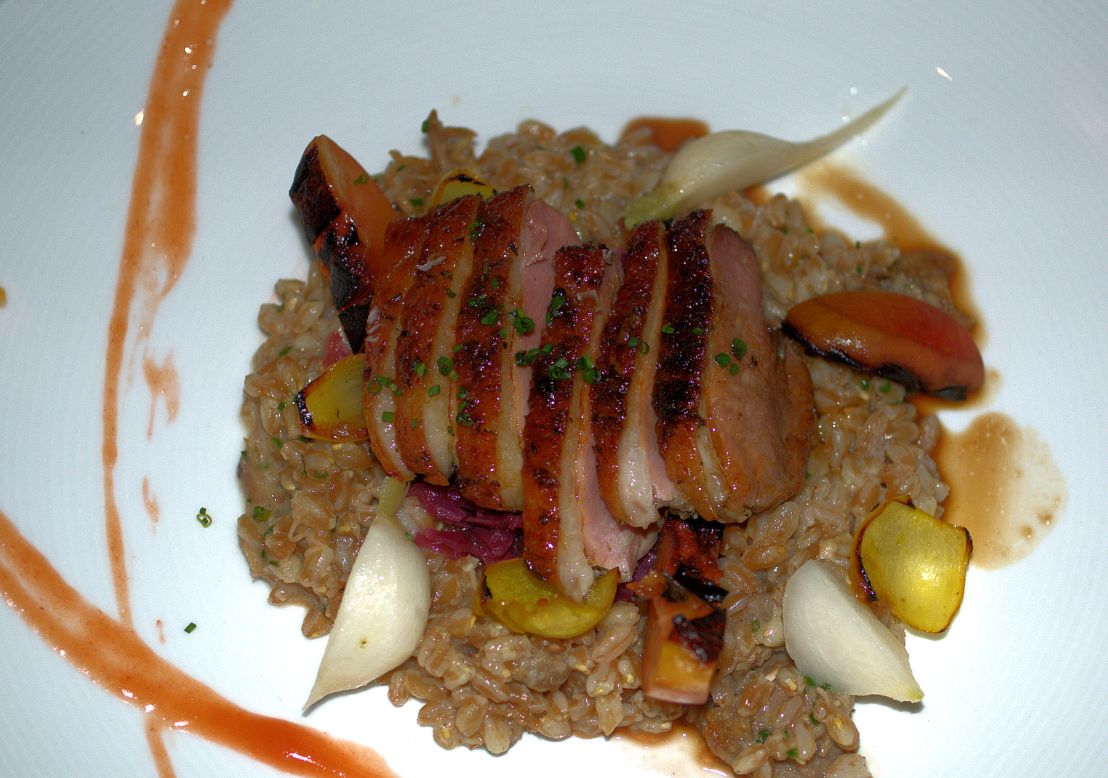 For our entrees, we ordered the Honey Peking Duck ($38) and the Roasted Berkshire Pork Chop ($39). The duck was actually duck breast with duck confit, farro salad, peaches, sweet and sour cabbage and glazed Hakurei turnip. We didn’t find but a bit of confit, but the duck was delicious and went well with the peaches and cabbage. The white crunchy turnip was an outlier.  The only trouble is: this isn’t Peking Duck. Peking Duck comes with crispy skin, moo shi pancakes, scallions and a sauce, usually hoi sin based. This was none of that. It was just roast duck breast, although very good, just not Peking.

The pork chop was another story. It was tough, dry and overcooked, and except for a bit of meat near the bone just wasn’t very good.  It was served with fresh corn polenta, formed into a buttery little cake, roasted carrot, spring onion and supposedly mustard jus, but it wasn’t apparent.  It simply was not marbled sufficiently to cook as a chop, and it dried right out. It was served cut into long rectangles, and the chef should have know it was really tough when he cut it up. There were some weird black crunchy things under the pork, and we asked the waitress what they were. She said “rhubarb,” but we didn’t think that was likely, so she took my roll plate with one on it and ran off to the kitchen to ask. She came back to tell us they were purple carrots. Maybe so, but with no carrotiness about them.

If you look at the pictures of the meal, all the platings suffer from really dull presentations and overall colorlessness. In the case of the ill-fated chop, the whole plate was black and brown. Needless to say, we didn’t order dessert. The check with 3 glasses of wine ans tax but before tip was $168.

Overall, this was a pretty disappointing meal, and we think you’d better give them a year or so before going there, so they improve their cooking and service. 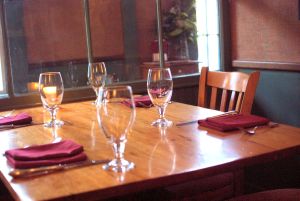