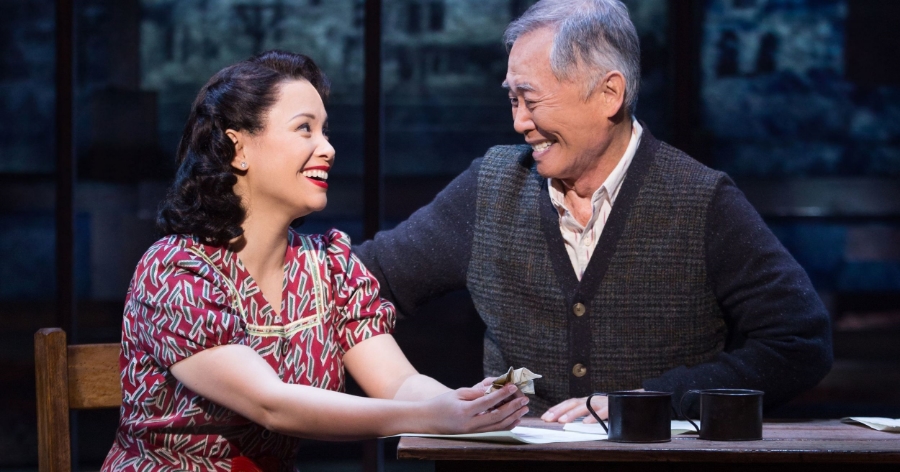 The short-lived Broadway musical Allegiance was screened in HD in some 600 theaters throughout the country yesterday. The show, inspired by Takei’s experiences in a Japanese-American internment camp had music and lyrics by Jay Kuo, and a book by Marc Acito, Kuo and Lorenzo Thione. It follows the experiences of the fictional Kimura family who were forcibly relocated to internment camps far from their west coast homes after the attack on Pearl Harbor, along with about 120,000 other Japanese-Americans.

Generally, HD rebroadcasts of plays, and musical works come with at least a single sheet program listing all the actors and production credits, but the neither Fathom Events organization nor the Trumbull Conn Post 14 theaters bothered with this nicety. Having only a brief glance at the closing credits, most of the cast information came from online sources.

George Takei, the beloved actor who started his career as Star Trek’s Mr. Sulu, and has become an activist and comic commentator led the bill, playing the avuncular grandfather of the Kimura clan, and in a present-day scene the aged version of young Sam from that clan.

While Takei headed the playbill, the real stars were Lea Salonga, playing Sam’s older sister Kei, and Telly Leung ,a fantastic actor with a gorgeous tenor voice who plays Sam Kimura as a young man. Salonga began her Broadway career in  Miss Saigon and played roles in Les Miz and voiced the lead in the cartoon Mulan. 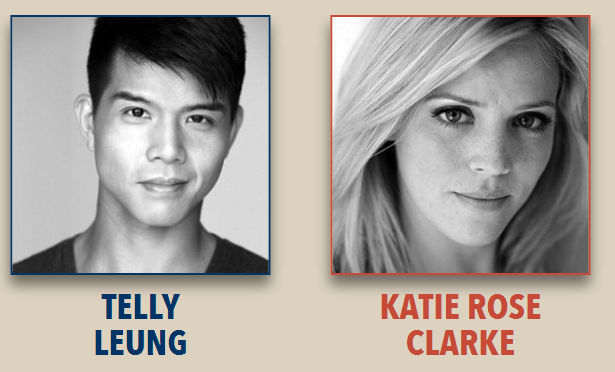 This show provided an excellent opportunity for a nearly all-Asian cast to shine and they proved themselves incredibly talented again and again in song and dance numbers, where the entire cast performed beautifully.

With such a talented cast, it is a shame that Allegiance never caught hold, running only about 4 months, and the fear that this was a just a history lesson about a shameful period of U.S. history might have kept audiences away.  Much of the show, however, is quite entertaining, with the developing relationships and family conflicts making up much of the story.

The central crisis of the first act is the idea that the Japanese-American men should be allowed to enlist to fight the enemy if they would swear allegiance to the U.S. and renounce and allegiance to the Emperor of Japan. This led to principled conflicts both ways, with Sam signing the paper and enlisting, while Frankie refuses and is imprisoned until the end of the war. The second act seems longer than the first and has fewer compelling scenes to keep it moving. The show ran 2:15 without intermission.

Jay Kuo’s music might have been part of the problem, with much of it the sort of full-throated poperetta ballads full of quarter-note triplets that infested much of Andrew Lloyd-Webber’s music as well as much of Les Miz. On the other hand the upbeat songs, written in a 1940s swing style are utterly charming, beginning with Sam and Hannah’s duet, “I Oughta Go,” which you can hear on the Amazon site. Unfortunately, all of Lea Salonga’s songs (and there are too many) are in that overblown poperetta style and basically all sound alike. The award-winning orchestrations by Lynne Shankel for a 13-piece orchestra, is wind-instrument heavy with only 3 strings and the wind harmonies are lush and lovely.

Interestingly, the only character based on a real person is the controversial Mike Masauoka (played by Greg Watanabe), a Japanese American functionary in Washington, who became the face of the JACL (Japanese American Citizen’s League) and worked to try to improve life in the camps, primarily by cooperating. He is shown as somewhat of a wheeler-dealer and was not well liked.

This is an important piece of Broadway history that was worth seeing even with its flaws, and it is a shame it never found much of an audience. Now that the HD showing is over, I wouldn’t be surprised to see a DVD version some time in the future. Look for it.