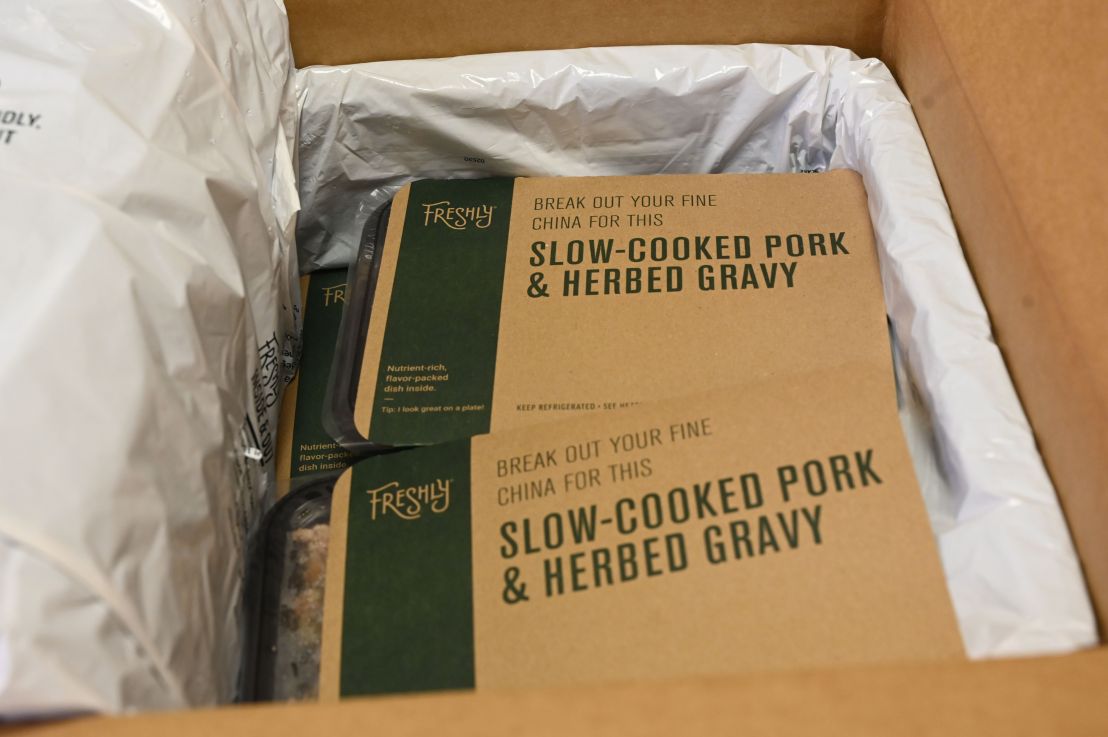 Freshly has been advertising heavily on TV and the Internet, promising “meals cooked by chefs and sent to you fresh.” The meals aren’t terribly expensive, amounting to $8.99 per meal in small quantities and $7.99 per meal if you commit to 12 per week.

We too advantage of an introductory offer and ordered six meals, figuring that we would order the second six after we’d tried them out.  As you will see, we never got that far.

We placed our order on March 30 for 6 meals: two each of

We got an acknowledgment that they would be delivered on Friday April 3, and they did come late that afternoon, but after our dinner plans had already been decided as homemade pizza.

The meals come packed in an insulated box surrounded by two sheets of frozen gelatinized water-ice. The meals were cold but not frozen and we quickly refrigerated them. Their literature says that they should keep for at least 5 days, or you should freeze them to keep longer. They also noted that we should use them fresh by the Use By dates, which were April 9 and 10. You can heat any of them up in the microwave in around 3 minutes. 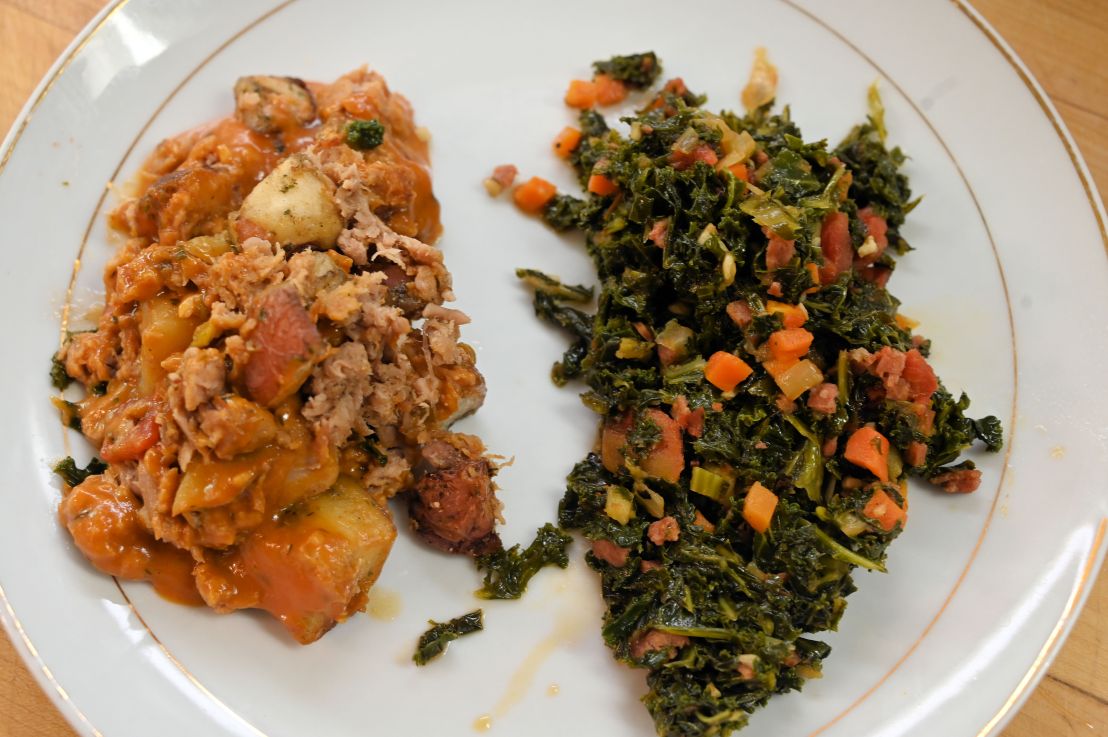 Saturday April 4, we decided to try the Slow-cooked Pork and Herbed Gravy. We supposed there would be real pieces of pork in the dish, but it was for the most part present only in very small granular pieces, like bits of ground beef. These meals are not for hearty appetites, the pork dish was rated at 420 calories, and the portions were small. But we are dealing with the old Catskills joke here: “The food is terrible and such small portions.”

The pork mixture had an unpleasant aftertaste that grew with each bite. We found we had some leftover homemade applesauce in the refrigerator, and by alternating bites of applesauce with the pork mixture, we were able to finish eating it. The Skillet Kale was another story. While there are number of well-known techniques to reduce the strong flavor of kale, they didn’t seem to have used them. It allegedly contained turkey-bacon crumbles but we didn’t notice them. The taste was simply vile. We rated this dish as one of the worst dinners we had ever had.

But we still had two more meals to try. Steak Peppercorn with Sautéed Carrots and French Green Beans seemed innocuous enough, so we had it for dinner on Tuesday April 7, long before the April 10 Use By date. The beef was actually Flat-Iron Steak, but their literature seemed to indicate that they had marinated it in something, so it was fairly tender.

However, by the third bite we knew we were in trouble. There was a taste and aftertaste that was so strong it began to make us feel nauseous, and we didn’t finish it. The carrots and beans were no better. My companion asked, “how can they screw up carrots?” They too had a different, unpleasant aftertaste and we ended up tossing both meals in the trash. The steak is supposed to be “topped with a creamy peppercorn sauce,” but we really didn’t detect this at all.

Since we hadn’t had much to eat, we broke out one of the Homestyle Chicken dishes, with Butternut Mac & Cheese. At first, we though this was going to be a winner, but by the third bite, the chicken tasted odd, although reasonably tender, and we couldn’t finish it either. The only thing we can say is that the mac and cheese was OK. But the green beans had the same off taste as the other vegetables, and we couldn’t finish them either. This may have been the “fragrant garlic oil” but we didn’t note any garlic flavor. 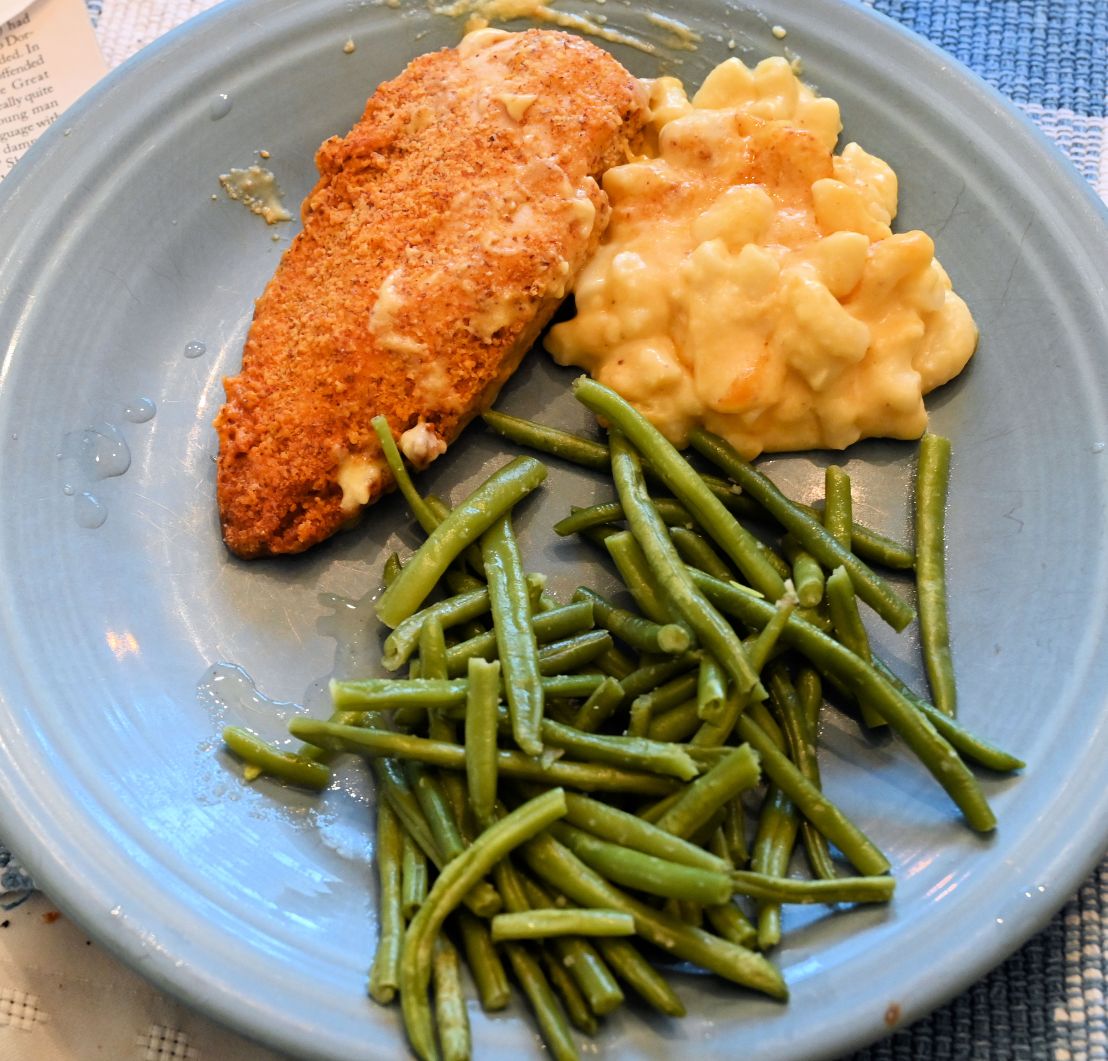 Now, we’ve eaten in lots of restaurants in a lot of places, and there have been a number of misfires in all those meals, but this is the only time we can think of where we really couldn’t finish the meals because they were absolutely terrible.

We immediately canceled our subscription to Freshly and they sent us nice polite acknowledgement. However, they’ve placed a cookie in our web browser’s database that keeps us from browsing their website further unless we renew our membership. This is unprofessional. Fortunately we have other browsers we could use to look up their prices and policies.

We obviously don’t recommend Freshly at all.

2 thoughts on “We try ‘Freshly’: delivered meals of little distinction”