Taking a tip from my friend Robert Lortz, I made square (or rectangular) biscuits today.

There are no scraps that you have to re-roll and the biscuits rise higher because you didn’t force them into a biscuit cutter. You just cut the dough with a table knife or sharp knife and move them onto a cookie sheet with a spatula. You can see the results.

My biscuit recipe is slightly different than Lortz’s but it is pretty similar. Rather than shredding the butter, you cut the stick into little slices and blend them into the flour with a pastry blender. The real difference is that you fold the dough into thirds and roll it out three times to make some buttery layers.

The result is tall, fluffy, buttery biscuits. Enjoy them! 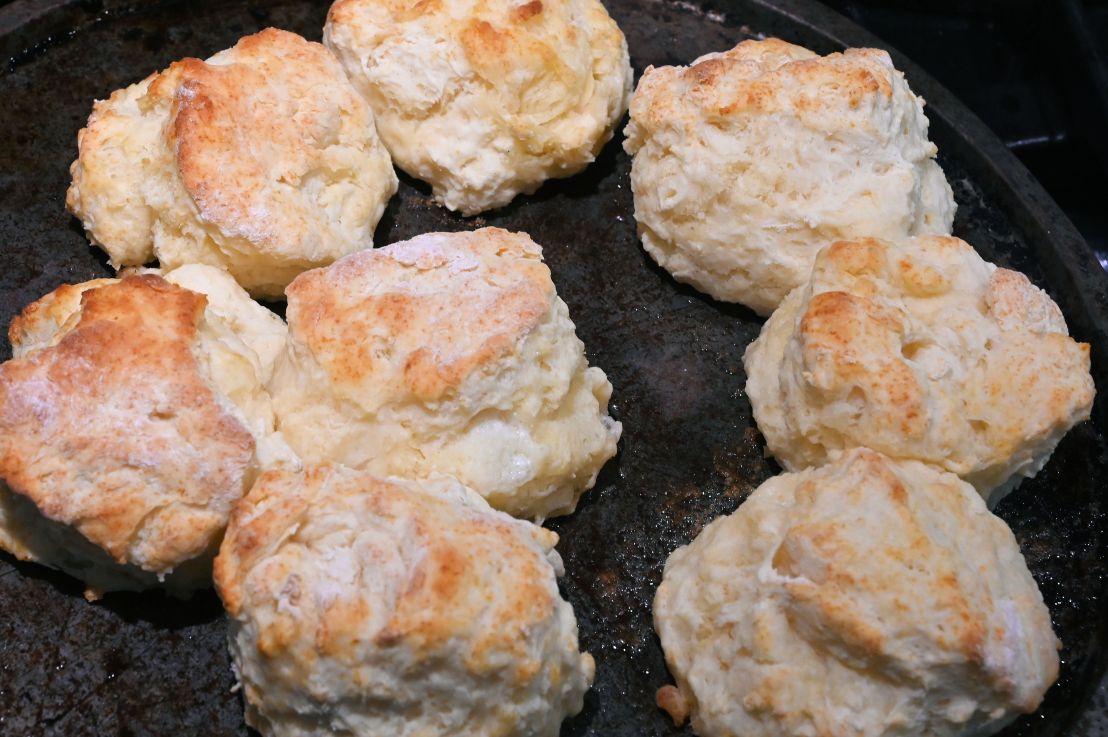 I made this article and movie to show that if you can make buttermilk biscuits from scratch in 4 minutes, there is no reason to resort to mixes or refrigerated (oy!) dough. The recipe is just

And after baking 10 minutes at 450 F, you have hot, tender, layered biscuits.

Chicken pot pie is an absolutely delicious comfort food for these cold winter days. Our version makes meaty chicken pies using the meat of a whole chicken and makes the stock for the stew base out of the carcass. It’s not a lot of work, but with the time it takes to cook the chicken and make the stock, the elapsed time is probably an hour a half. However, there is very little actual labor. In this version, the crust for our pie is buttermilk biscuits, from this recipe. 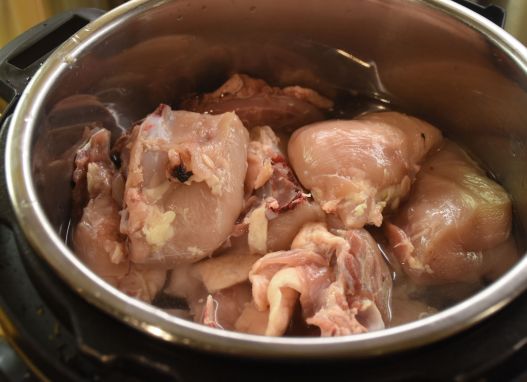 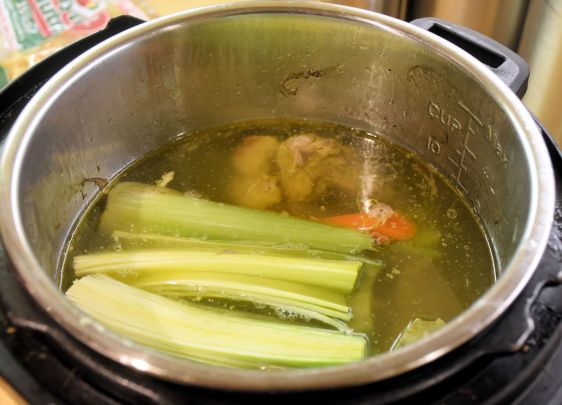 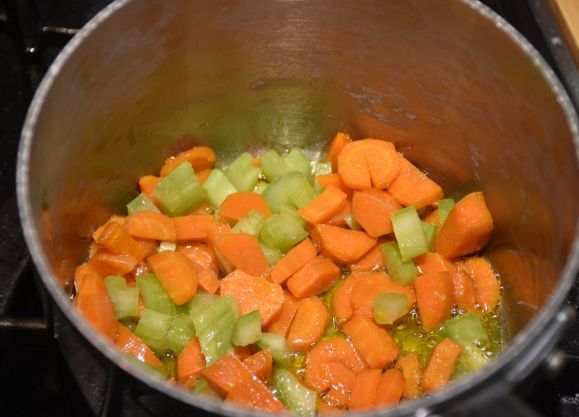 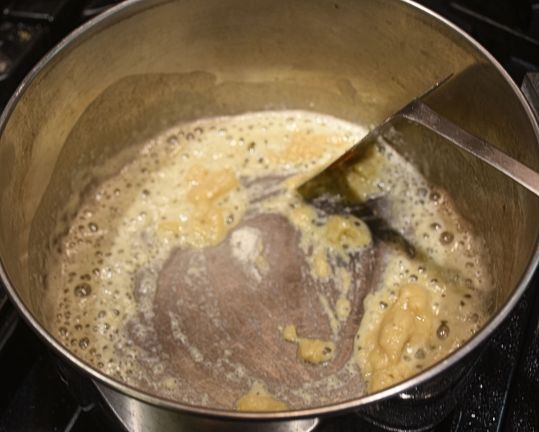 Note: Another approach is to put the chicken mixture into soup crocks. For a crust, roll out some puff pastry, and brush with a small of egg-water mixture. Bake for 15 minutes as above. 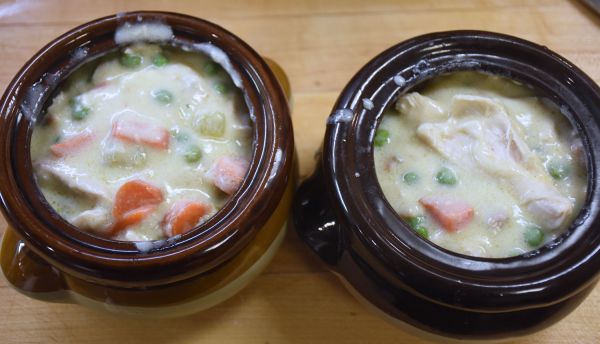 Either way, this serves at least 4 people. We put the other half of the chicken mixture in these soup crocks to freeze for another meal. 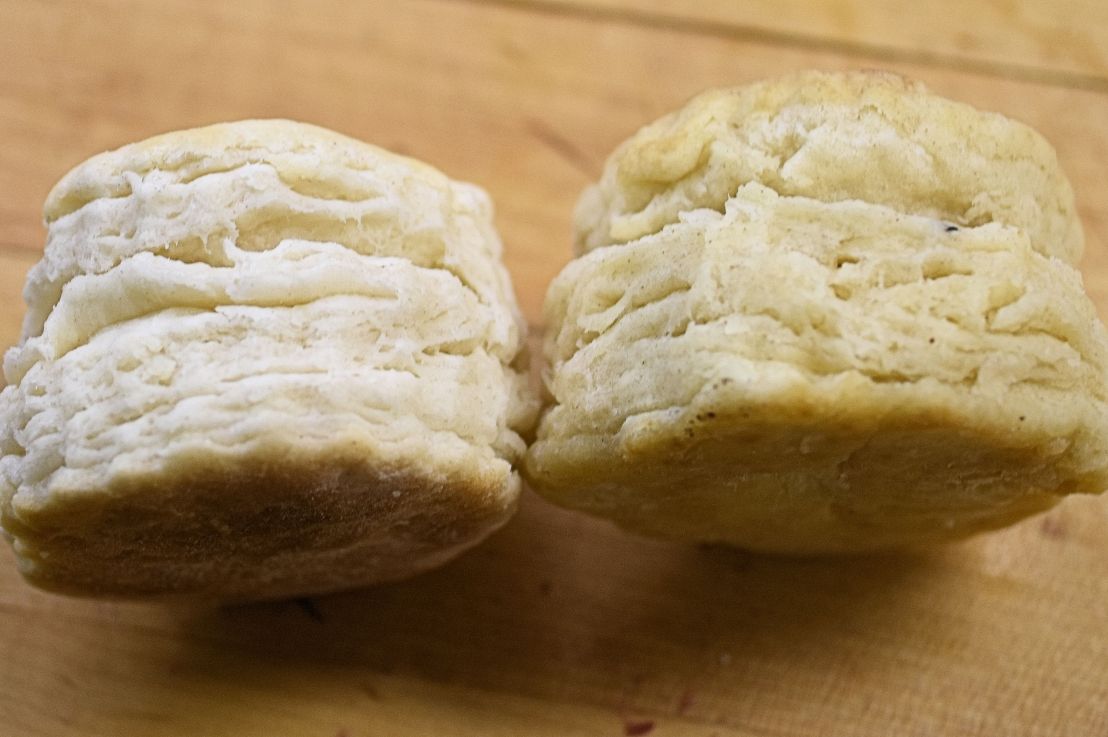 Our recipe for biscuits is really very simple, with flour, baking powder, baking soda, salt, unsalted butter and buttermilk. And it took a leap into high quality when we decided to fold and roll the biscuit dough, like you do when making croissants. Otherwise, it is much like hundreds of other recipes.

There have been a spate of articles in the past few months about why Northerners can’t make biscuits as good as Southerners do (and here we mean the Southern and Northern United States.)  See also “Why Most of America is Terrible at Making Biscuits.” 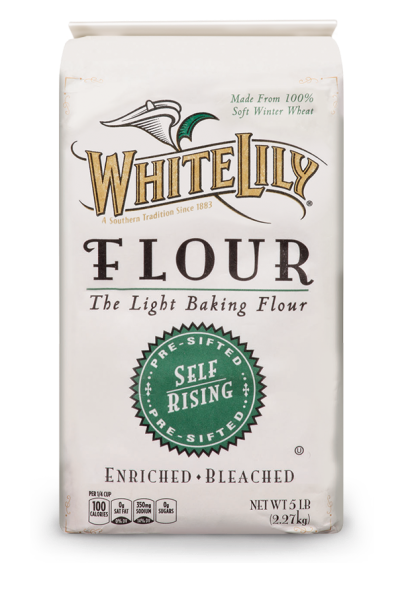 One such article “Here’s why Southern Biscuits are Better” explains that southern cooks use a soft wheat flour like White Lily which has a much lower protein (and gluten) content, about 8-9 %, while an all purpose flour like King Arthur can be 11.7%. King Arthur All Purpose flour is close to bread flour which is 12.7%, while White Lily has the texture of cake flour, which is 6.9% to 7.1% for various brands.

Well, the authors of the two articles above point out that Southern biscuit makers use the low protein White Lily Flour, which is only available in the southern U.S., despite being distributed by Smuckers. You can, of course, buy it on line for a premium price and we did, to see what the difference really is.

We made our biscuits using our normal recipe:

In our recipe, we mix all the dry ingredients, and then cut in the butter using a pastry blender (or two forks).  Then, we add the buttermilk and mix it in with a fork and roll out the dough. We recently found that we had a pastry marble, which helps keep the butter cold, and we rolled out the dough on the marble. Then, and this is significant, we folded the dough into thirds and rolled it out again. We repeated that twice more, thus making more buttery layers within the biscuits. The resulting biscuits are excellent.

White Lily Flour is commonly sold as Self-Rising, which means that every cup of flour has 1 ½ tsp baking powder and ½ tsp salt already added. White Lily is also bleached, which weakens the gluten a bit more, so this could also change the biscuit characteristics. (You can buy the non-leavened version as well.)

The recipes we looked at simply vary in the quantity of flour and shortenings. This one is pretty typical.

As before, we mixed the butter in with the pastry blender and added the buttermilk. One cup is a bit stingy, and we added a bit more buttermilk to make a workable dough. We rolled out the dough as before, (on our pastry marble) and folded it into thirds and rolled it out 3 times as before. Some recipe writers claim that you should cut out the biscuits without twisting your biscuit cutter, so we did that too for both batches. This may be just an old custom without a lot of science behind it, though.

We baked both biscuits for 10 minutes at 450˚ F. The White Lily ones were a bit taller since there was more flour in the dough recipe and thus the dough was a bit thicker when rolled out on the marble. So we baked these Southern biscuits a bit longer until they began to brown. 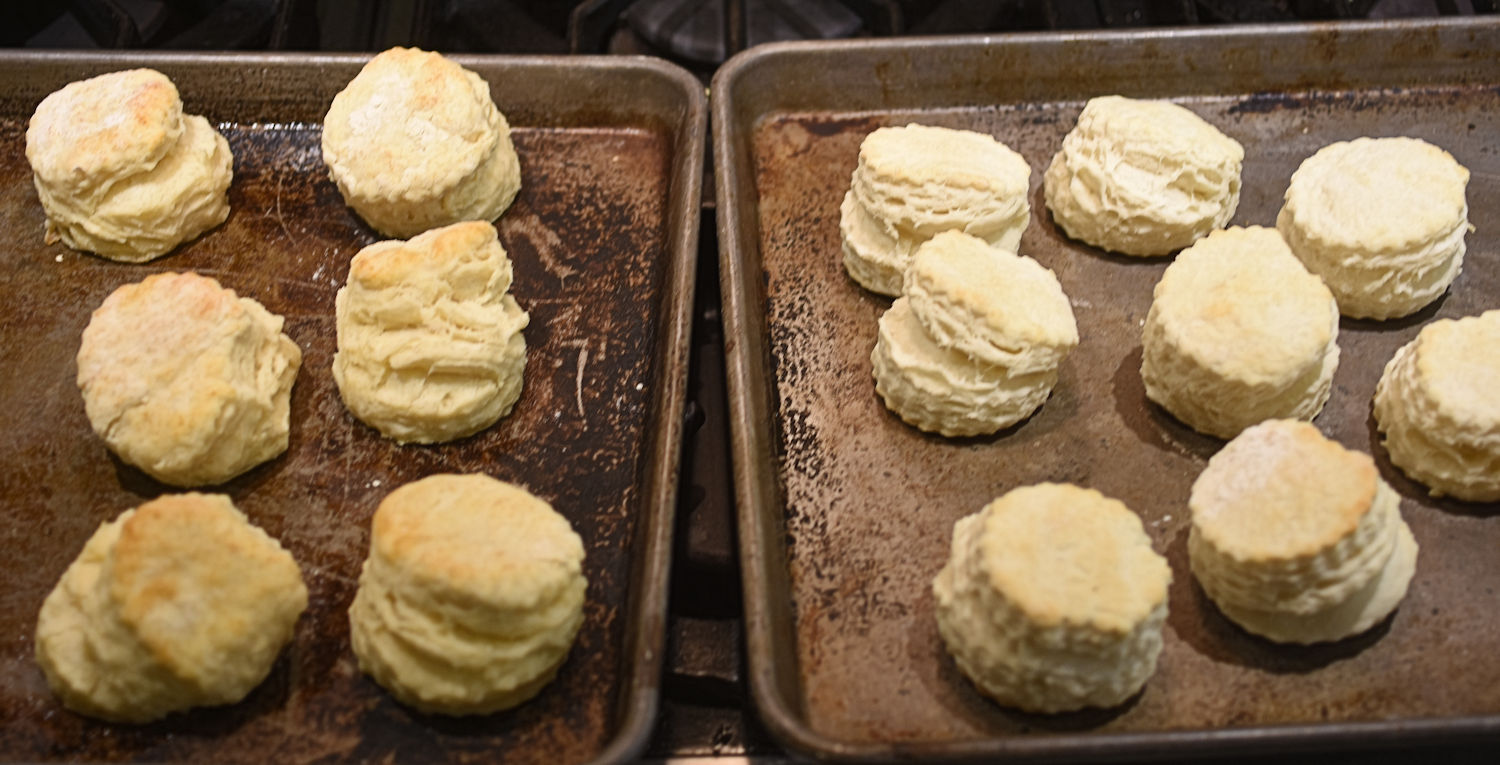 How are the biscuits different?

The King Arthur biscuits are a little darker and the White Lily a little lighter, because the White Lily flour is bleached. But the taste and texture of the two are very similar. Since we had to cook the taller White Lily biscuits a bit longer, the bottoms were a bit thicker and crunchier than those from King Arthur flour. However, see below on this point.

The crumb and texture of the two biscuits are very similar and both quite tasty. (See the picture at the top of the article, as well.) We just didn’t find much difference. The secret seems to be the layers of butter from folding and rolling, and both biscuits have that nice buttery flavor. 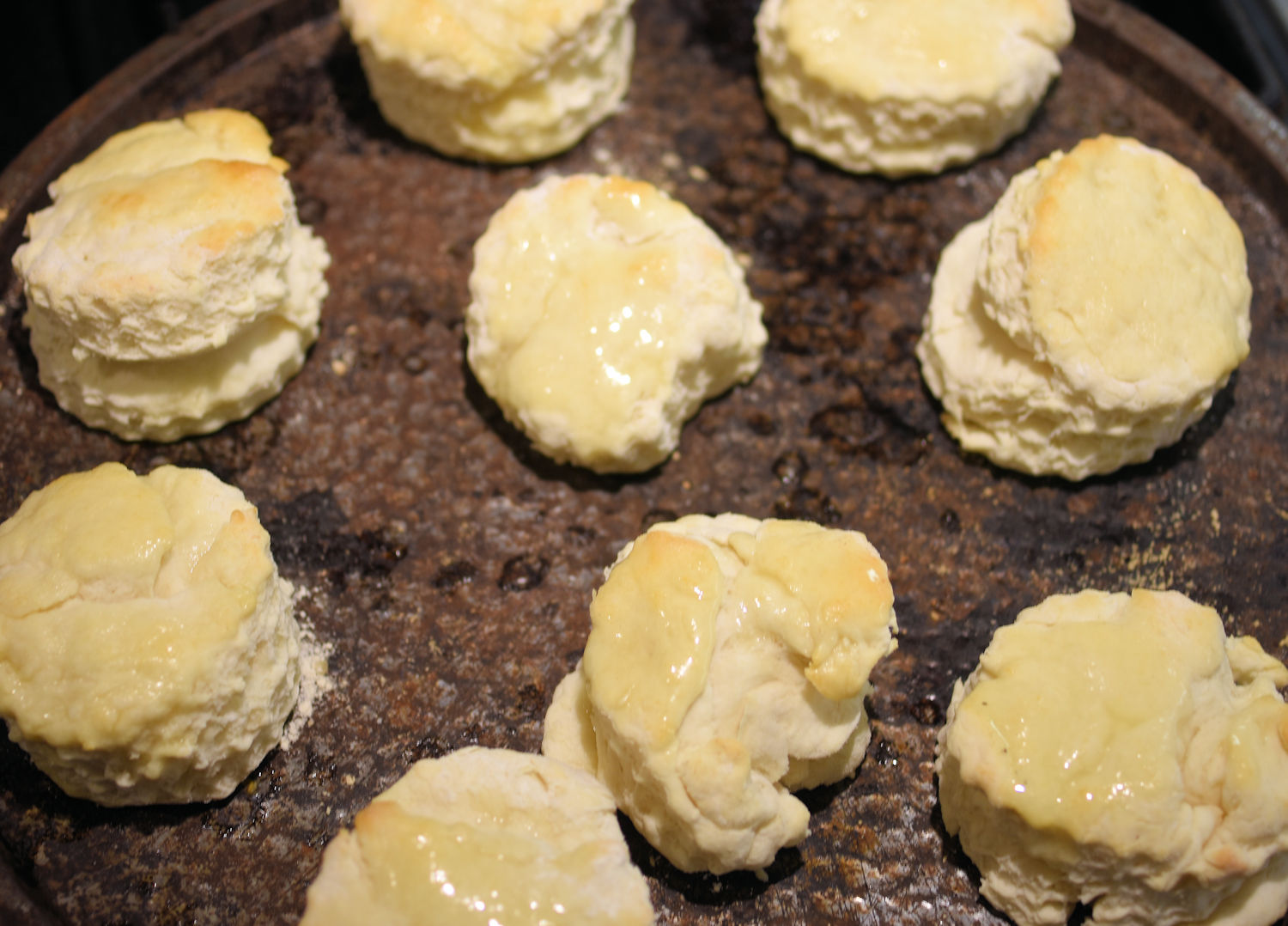 We also tried making the White Lily biscuits using the recipe on the flour package, which commenters on the existing recipes said worked perfectly. It differs only in that the butter is replaced by Crisco. The biscuits are very pretty,  but pretty tasteless. The recipe suggests that you brush the biscuits with melted butter as shown. It doesn’t improve them much. 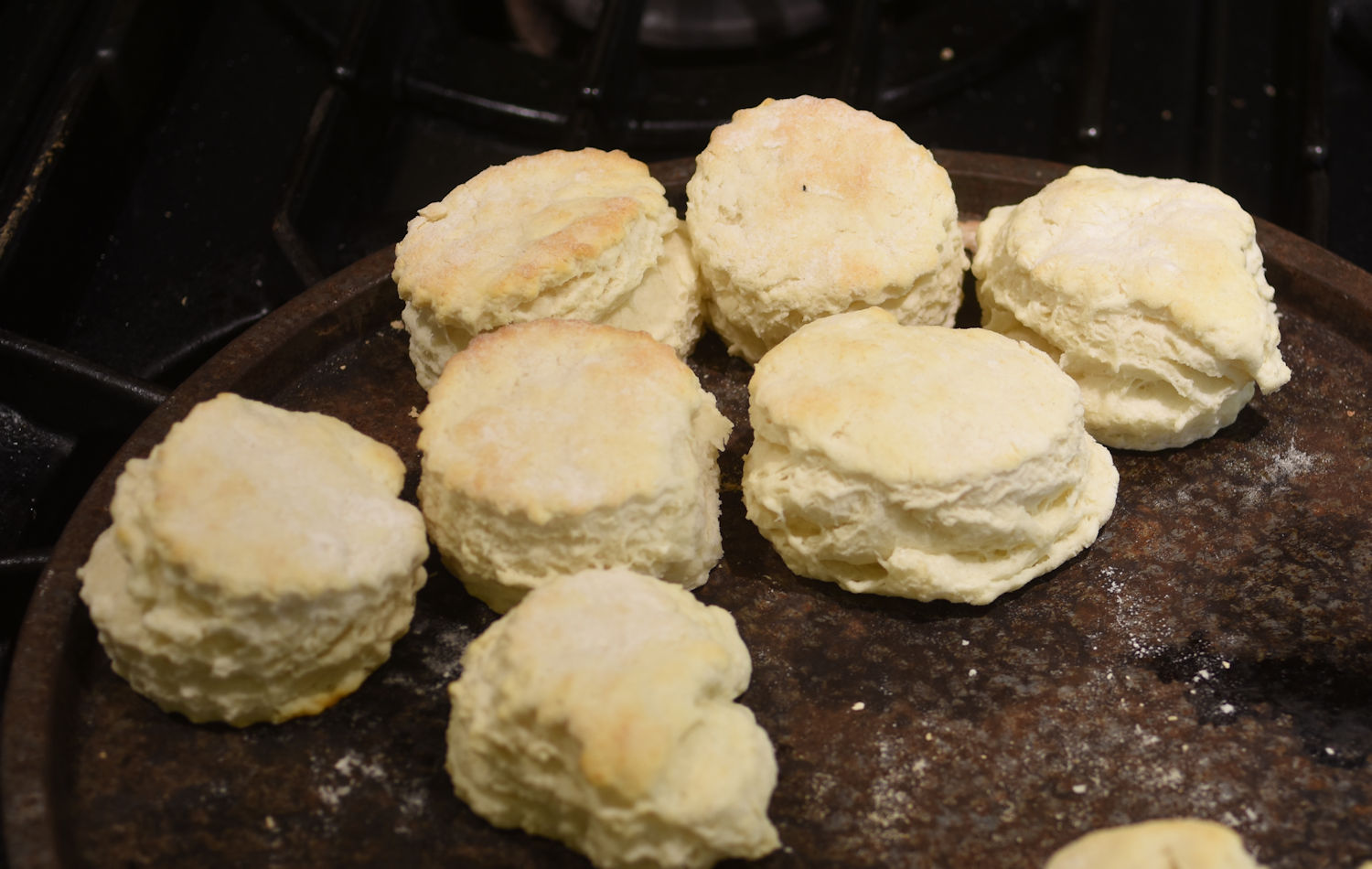 To reduce the number of biscuits to the number we could roll out, we made the recipe again using just 2 cups of White Lily flour and 2/3 stick of shredded frozen butter. These were very good, but, frankly, no better than the King Arthur flour recipe.

Finally, we made the White Lily biscuits using cold, but not frozen butter, much as we made the King Arthur biscuits. These biscuits were not as tall or “layery.” Apparently the lower gluten flour affects this layering and you need frozen butter to achieve this effect with White Lily.

Our conclusion is, if you live in the South where you can buy White Lily Flour for about $2.50 for 5 pounds, go for it. But in the rest of the country, use All Purpose Flour and unsalted butter, and you will be very happy with the results. 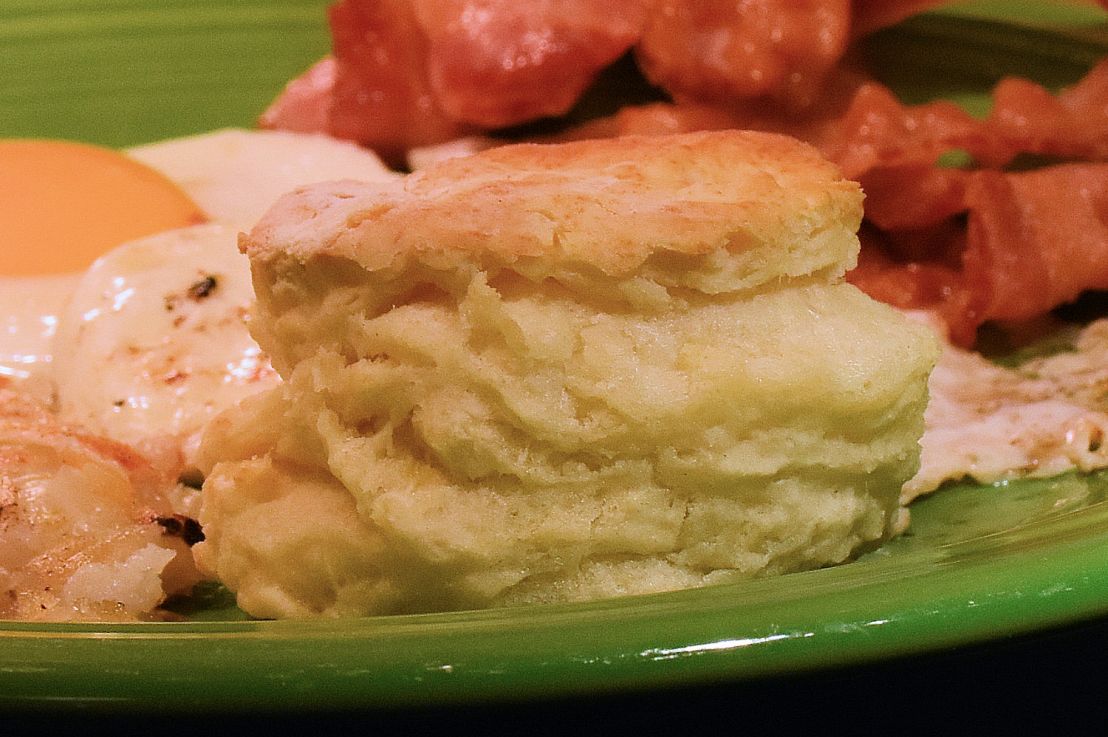 Buttermilk biscuits are great for breakfast (or dinner) and take very little time to make. In this recipe, we used unsalted butter, and devised a trick to make them even flakier. Just as in making croissants, we turn and fold the dough a couple of times to make more layers of butter. The result is biscuits made up of many layers, and with a terrific flavor. We use unsalted butter because it contains less water than salted butter, but you can use salted butter if that is all you have. 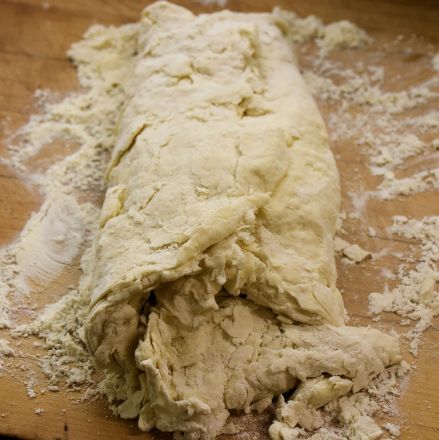 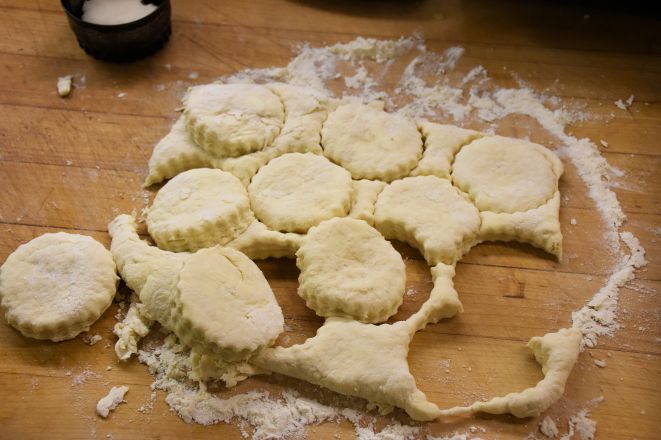 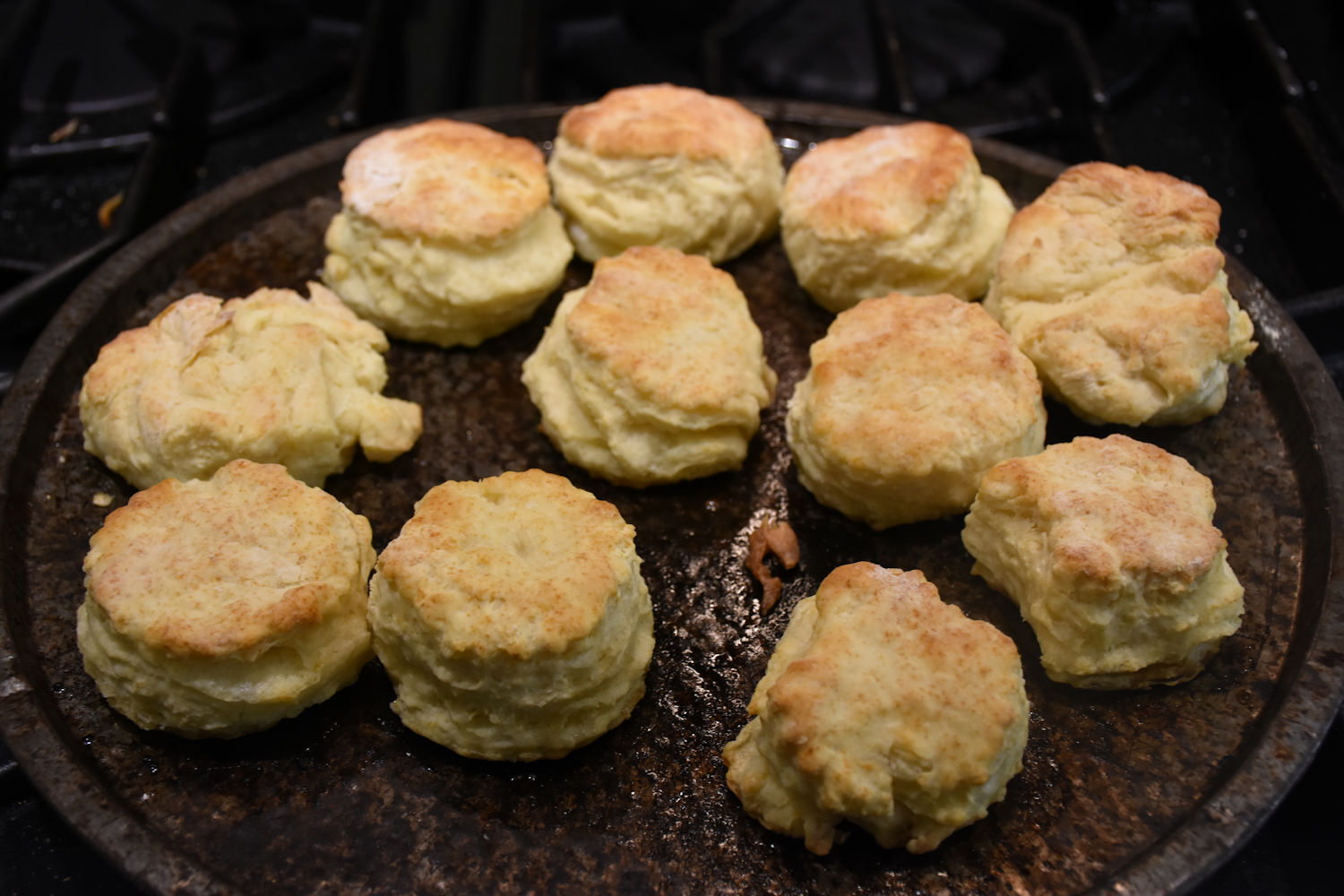