That restaurant at 15 South Water Street that keeps opening and closing, once the beloved Atlantic Café, then the Seadog Brewpub and then Nix’s (which closed suddenly last August),  reopened this spring as The Charlie Noble. It’s run by Fred Bisaillon and Denise Corson, who also run the B-ACK Yard BBQ. The name “Charlie Noble” is nautical slang for the smokestack over the ship’s galley. The owners intend this to be a family restaurant much like the Atlantic Café, and open year round.

The restaurant layout is much as it always has been: an L-shaped room with the bar in the right corner, and tables along the windows and left side. The kitchen area is behind doors and takes up the rest of the “L”, since they need space because they have a cuisinart food processor dlc 2011chb. The rear windows look out on the water.

Their menu includes similar dishes to the previous occupants, with appetizers including crab cakes, shrimp cocktail, crab cocktail, lobster quesadilla, wings, and crab cakes, and, of course clam chowder. Fried clams are available as an appetizer (MP) but not as an entrée. The main courses feature seafood such as lobster and seafood stew ($32), fish and chips ($24), blackened salmon ($23), and golden shrimp plate ($28). They also offer prime beef short rib ($33), Mushroom Kale Bolognese ($24), and a 12 oz NY Strip ($36).

And, of course, they have a plentiful selection of beers on tap.

One menu item that caught our eye is the Big Bucket Fried Chicken Dinner ($48) which includes fries, corn on the cob, coleslaw, gravy and a bucket that is supposed to contain 8 pieces of “honey-stung” chicken.

The coleslaw was very good, the corn on the cob was Mexican corn style, but nowhere near as tasty as that served at Millie’s. The French fries were indifferent: dry and a bit tough, and not very hot. There were also 4 dinner rolls (but no butter) that we weren’t sure what to do with. 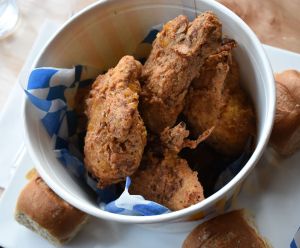 There were 6 chicken objects in the bucket: 2 wings (tips included), 2 breasts, and 2 legs. But if you cut the drumstick from the thigh at the knee joint, you have your 8 pieces. Of course, if you separate the wings into two drummettes, you have 10, but that way lies madness!

The chicken was warm, but not piping hot out of a fryer, and while the dark meat was moist, the breasts were rather dry. And that “honey-stung” wash on the chicken was a mixture of honey and lime, which we found rather odd. See if you can get them to leave it off.  We figured out that the gravy was to pour on our chicken breasts to make them moister, and that worked rather well.

If there are only 2 adults on this, you’ll take some home with you. The very nice servers brought us plastic clamshells, but we had to fill them ourselves. You might do better with the sandwiches, though, but don’t expect much from the (frozen) fries.

This is a restaurant that Nantucket needs and it deserves to succeed. But they still have some work to do and we wish them well.