As we have said many times before, Toppers restaurant at the Wauwinet Hotel is an absolutely outstanding restaurant, and considered by many the finest in New England and one of the nation’s most acclaimed restaurants.

Chef Kyle Zachary has created an unforgettable dining experience, and surprisingly not much more expensive than any other Nantucket restaurant. The $95 prix fixe includes appetizer, entrée, dessert and several other little surprise courses as well. While wine is, of course, an extra charge, coffee and tea are included, making this an actual bargain as well. Here is the current menu.

We started out with a basket of 4 cheese gougeres, followed by a basket of rolls and a sweet warm brown bread and two eggs of butter, one smoked and one with sea salt topping.

One of our first courses was Cured Scottish Ocean Trout, with smoked Roe, Cucumbers, Santa Claa Melon, and Finger Limes. In addition there was a separate melon dressing you could apply as you liked. A little is shown in the photo.  I have never had a dish anything like this: the cured trout was plentiful and flavorful and went very well with the sliced white melon.

Our other appetizer course was Broccoli Rabe and Potato Carmelle, which included Italian summer truffles, chanterelle mushrooms, almonds and pecorino Romano.  This also was a really creative dish in which the broccoli rabe was pureed and served inside the potato shells like little ravioli.

One of our entrees was Butter Poached North Atlantic lobster (above), a name which does not begin to describe this amazing dish. It was served with young carrots, forbidden rice (a kind of black rice), pickled coconut, and a Madras curry sabayon. The pieces that look rather like bacon are thinly sliced cabbage, it seems. You have never had a lobster served with such loving care and imagination.

Our final entrée was called Variations of Lamb: lamb served three ways; belly, back and rib meat with summer beans, Swiss chard, cipollini onions and a condiment made from golden raisins. 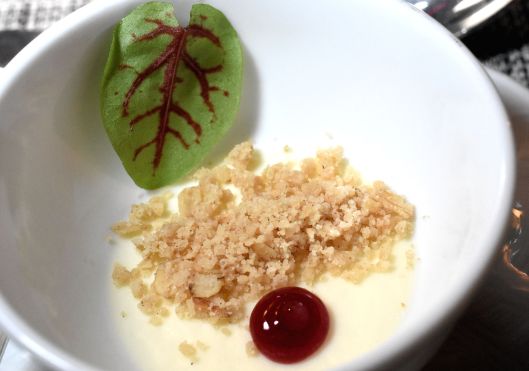 Then, before our desserts arrive, they brought a little “pre-dessert” of a bit of vanilla custard with a crunchy topping and a bit of raspberry and s single decorative leaf.

One of our desserts was a fabulous Cherry-Chocolate Bombe with Maracaibo Mousse, Bing Cherries, Devil’s Food Cake, White Chocolate Ice Cream. Inside cherry shell is the chocolate mousse, and every bit was delicious. 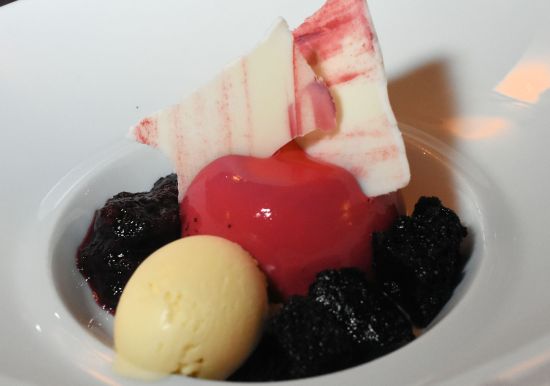 Finally, our post dessert was two little gel candies and two chocolate candies on a little dish. One of the gels was already devoured before the shutter could be clicked.

Even with 3 glasses of wine and tax, the bill before tip was only $266. A finer dinner you will not find in very many places.

We note that you should probably phone for reservations rather than using the on-line reservation system as our table was in the outer patio, which while enclosed is not as elegant as the main dining room, and where families with (fussy) children often are seated.